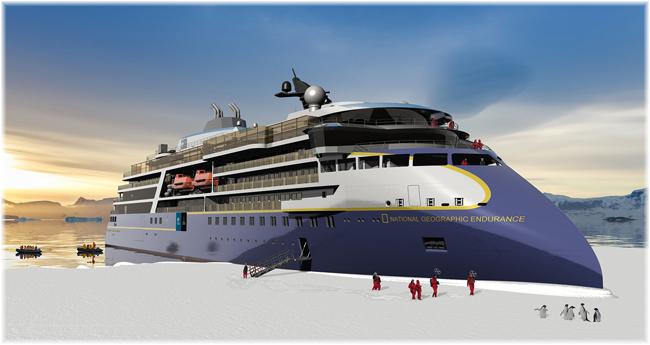 Lindblad Expeditions and Ulstein celebrated the keel laying of Lindblad’s second polar new build at the CRIST shipyard in Gdynia, Poland. The occasion also served as the official naming ceremony of the vessel.

National Geographic Resolution was named to honor Captain James Cook, the legendary explorer who was the first to circumnavigate Antarctica, cross the Antarctic Circle, and the first European to reach Hawaii. While he captained several ships in his career, his favorite was the MS Resolution.

Scheduled for delivery in Q4 2021, she is sister ship to the National Geographic Endurance which will make her inaugural voyage in April 2020.

The 126-guest Polar Class 5 National Geographic Resolution will feature Ulstein’s signature X-BOW®, a distinctive bow that provides fuel efficiency while significantly improving guest comfort in rough seas; and a very high ice class for access deep into Polar Regions. The ship’s expanded fuel and water tanks provide for extended operations in remote areas; while the zero-speed stabilizers will ensure stability, whether at zero speed or full steam ahead.

A highlight of the ceremony was the traditional laying of the commemorative silver coin, the Hawaii Sesquicentennial half dollar, struck in 1928 by the United States Bureau of the Mint in honor of the 150th anniversary of Captain James Cook’s landing in Hawaii. The rare vintage coin is owned by Sven Lindblad and depicts Captain Cook on the obverse and a Hawaiian chieftain on the reverse.