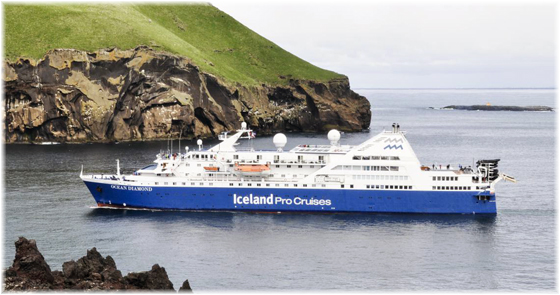 Iceland and Greenland specialist Iceland ProCruises has released the 2020 program. Due to the high demand, the program has been further expanded and extended by a ten-day Circumnavigation of Iceland and an eight-day express Circumnavigation.

For all trips there is an early bird discount of 20 percent for bookings through 30 December 2019.

The company’s premier itinerary – the circumnavigation of Iceland, is offered on eleven departure dates from mid-May to mid-July and one in early September. These trips with the OCEAN DIAMOND are soft expedition cruises and are accompanied by an Icelandic expedition team, who all speak English and German.
The journey begins and ends in Reykjavik. Ports on the circuit are Stykkisholmur, Isafjördur, Siglufjördur, Akureyri, Skjalfandi Bay, Seydisfjördur, Djupivogur and Vestmannaeyjar. The ten-day (nine-night) trip is available from 2,320 USD per person.

The voyage “Iceland Circumnavigation Express” will takes guests to and from Reykjavik on the OCEAN DIAMOND for seven nights around the island. The tour visits Stykkisholmur, Isafjördur, Akureyri, Skjalfandi Bay, Djupivogur and on the Westman Islands. The eight-day (seven night) trip sails September 6-19 is available from 1,890 USD per person.

There are two trips to Greenland with flights to and from Kangerlussuaq (Greenland) and Keflavik included in the price. The Natural Wonders of the West Coast of Greenland is available August 9 to 20 from Reykjavik via the Westman Islands to Narsarsuaq.

From Greenland’s capital Nuuk, the route leads to Ilulissat with its ice fjord before cruising onward via Uummannaq to the destination port of Kangerlussuaq. The twelve-day trip (11 night) is available from 3,195 USD per person. The second itinerary travels from Kangerlussuaq to Reykjavik August 20 to 31 and is available from 3,195 USD per person.

“Northern Lights and Whales” the combination trip by bus and ship is available for booking at the end of the 2019 season. On this seven-day (6-night) trip to and from Reykjavik the OCEAN DIAMOND will run from Reykjavik to Stykkisholmur, Isafjördur and Husavik September 23 to 29 where guests will leave the ship for an interesting bus trip back to Reykjavik with many excursions along the way.

The trip is also offered in reverse order and beginning September 23 with the bus trip from Reykjavik going on to Husavik and then on-board the ship back to Reykjavik. These trips are priced from 2,260 USD per person. Sightings of whales are common at this time of year along with the possibility of seeing the spectacular Northern Lights making this a very popular trip.

There are still availabilities for cruises in 2019 around Iceland and Greenland.