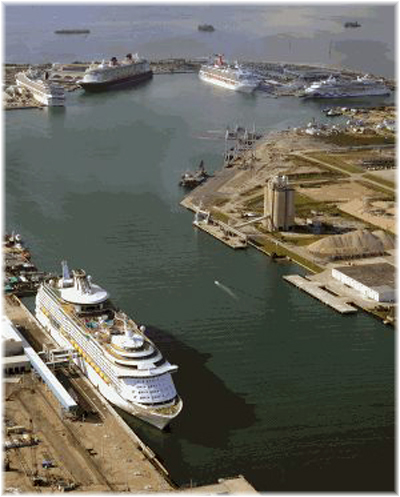 Port Canaveral will be a popular stop for port-of-call cruise ships during the last months of 2019, with 38 vessels scheduled to visit the world’s second-busiest cruise port between now and Dec. 31.

“Port Canaveral is an enticing port-of-call for some of the world’s most prestigious cruise lines, and that means more visitors, more tourism dollars, and more attention focused on the Port and the Space Coast,” Murray said. “We are pleased to welcome these magnificent cruise ships and their guests, and we hope to generate even more port-of-call visits in the coming years.”

On Oct. 10, TUI Cruises’ Mein Schiff I made her inaugural call to the Port, bringing more than 2,800 guests who visited local attractions or rode bicycles around the Port. While on an 11-day, round-trip cruise from New York to The Bahamas and back, the 16-deck cruise ship arrived at Cruise Terminal 10. Many disembarked guests boarded buses for excursions to nearby Kennedy Space Center Visitor Complex, while others chose to rent bicycles and tour the Port’s recreational areas.

Vessels planning upcoming port of calls include the Mein Schiff 1 on Oct. 30, Disney’s Disney Magic on Oct. 31, the AIDAluna on Nov. 3, Royal Caribbean’s Anthem of the seas on Nov. 4 and Grandeur of the Seas on Nov. 5, AIDA Cruises’ AIDAdiva on Nov. 9 and Norwegian’s Norwegian Bliss on Nov. 26.

According to a newly released, Port-commissioned economic impact study by Business Research & Economic Advisers, cruise passengers on a port-of-call vessel at Port Canaveral spent on average nearly $80 per person and crew members spent an average of $103 per person during their time ashore.