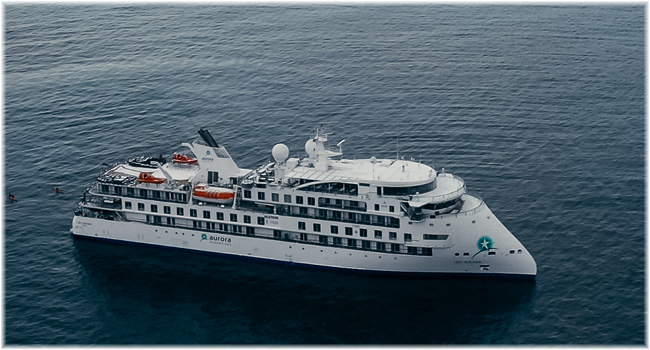 Aurora Expeditions, a world leader in expeditions to the polar regions, today (Oct.31) celebrated the christening of their highly anticipated and innovative ship, the Greg Mortimer.

In a ceremony set against the snow-capped mountains of Ushuaia, Argentina, co-founder of Aurora Expeditions and Godmother to the ship, Margaret Mortimer, smashed a ceremonial piece of Antarctic ice against the world’s first passenger expedition ship featuring the Ulstein X-BOW®, with the words, “I name this ship, Greg Mortimer. May God bless her and all who sail in her”.

Alongside Margaret was her husband, renowned explorer and co-founder of Aurora Expeditions, Greg Mortimer, who the ship is proudly named after.

Speaking of her role as Godmother of the ship, Margaret Mortimer said: “It never crossed my mind that I would one day be Godmother to a ship named after my husband. I am so proud to be launching his namesake and pay tribute to all those hard-working people who have made this ship a reality. For future expeditioners, I hope you enjoy many hours of life changing moments on board the Greg Mortimer.”

Joined by officials from Sunstone, CMI, Ulstein, maiden voyage guests and Aurora Expedition’s expedition team, the ceremony marked the beginning of a new era for the rapidly growing company and sets a new standard for the expedition cruise industry.

As the first passenger vessel in the world to utilise the patented Ulstein X-BOW® technology, an inverted bow design that enables a ship to pierce waves with much greater stability than a traditional bow, the Greg Mortimer is set to completely transform the experience of navigating the world’s heaviest seas, particularly the Drake Passage. The novel-shaped X-BOW® created by Norwegian ship designer, Ulstein, absorbs the force of waves more consistently across its surface, drastically improving steadiness and comfort, fuel efficiency and minimises vibrations and disruptions to marine life.

Managing Director of Aurora Expeditions, Robert Halfpenny, said of the historic launch, “We are so proud to be launching this first in expedition cruising here today. We are excited to invite our guests to experience Mother Nature at her best and visit the most remote areas in the world, all whilst in the refined and relaxed comfort of the Greg Mortimer. Integral to Aurora Expeditions’ DNA is sustainability and preservation of natural areas, and that is showcased in the design of the Greg Mortimer with anchorless technology and reduced emissions. With our small expedition ships, lower environmental impact and improved comfort, Aurora Expeditions really is leading the way in expedition cruising.”