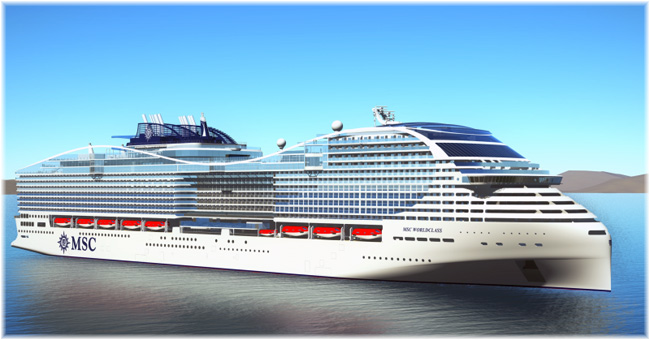 The delivery ceremony of MSC Cruises’ newest flagship and one of the most environmentally-advanced ships at sea yet took place in the presence of Gianluigi Aponte, MSC Group Chairman.

Earlier in the morning a second important milestone event took place with the traditional cutting of the first steel and naming of the first World Class ship, MSC Europa, by MSC Cruises’ Executive Chairman, Pierfrancesco Vago.
MSC Europa is the first of five liquified natural gas (LNG)-powered cruise ships on order and the first LNG ship to be built in France. The two events marked another important step forward in MSC Cruises’ long-term commitment to environmental stewardship both at sea as well as ashore.

Pierfrancesco Vago, MSC Cruises’ Executive Chairman, said: “MSC Cruises has since its inception embraced a commitment to environmental stewardship and ways to minimise and continuously reduce our environmental footprint both at sea and ashore with the use of innovative, leading-edge and effective technologies across our entire fleet. With each new ship we raise the bar of environmental performance and our ultimate goal is zero emissions operations. MSC Grandiosa moves us another significant step forward in that genuine ambition.”

Mr Vago continued, “Today is even more significant as we begin the construction of our first of five LNG-propelled ship, which will further elevate our standards in environmentally-sound cruising thanks to this use of alternative fuels, as well as other cutting-edge technologies.”

Mr Vago concluded, “Our journey when it comes to environmental protection both while at sea and when calling the port communities that we serve does not stop here. With each new ship each time we will push further the boundaries of innovation in terms of environmental technology. And we will specifically focus our R&D investment into accelerating the development of next-generation advanced solutions and other technologies – from more alternative fuels, shore power availability, batteries, fuel cells and beyond. All of this while we retrofit and upgrade our existing fleet – one of the most modern at sea – with the latest and best available technologies to continuously improve our environmental performance fleet-wide.”

Laurent Castaing, General Manager, Chantiers de l’Atlantique, added, “The delivery of MSC Grandiosa and the official start of construction of the first World Class ship are two major milestones in the history of our partnership with MSC Cruises. At Chantiers de l’Atlantique, we are happy and proud to provide our privileged customer with state-of-the-art solutions which significantly lessen the environmental impact of the ships. MSC Cruises can thus benefit from the result of R&D programmes we have been leading for the last ten years on energy saving schemes and environmentally-friendly technologies.”

In conjunction with the cutting of the first steel ceremony of MSC Europa, MSC Cruises and Chantiers de l’Atlantique today also unveiled a ground-breaking R&D project named PACBOAT that focuses on the integration of a new fuel cell technology demonstrator onboard the LNG-powered MSC Cruises ship. This demonstrator will produce electricity and heat using LNG. The announcement was marked by the signing of the consortium agreement between the various partners involved.

The integration of a Solid Oxide Fuel Cell (SOFC) technology onboard a cruise ship is a world first. This technology operates at very high temperature (~750° C) and is more efficient for high-power marine-like applications than the low-temperature Hydrogen-based Proton Exchange Membrane Fuel Cell (PEMFC) solutions, used for instance in the automotive sector. The SOFC technology offers a very good electrical efficiency of up to 60 per cent and as the heat produced can be self-consumed on board its total efficiency – heat and electricity – can be much higher, resulting in a direct reduction of energy consumption and, therefore, of greenhouse gas (GHG) emissions.

This SOFC solution fueled by LNG would thus reduce emission of GHG by about 30 per cent compared with a conventional LNG engine, with no emission of nitrogen oxides, sulphur oxides or fine particles. In addition, it offers the advantage of being compatible with many fuels (LNG/methane, methanol, ammonia, hydrogen, etc.), and thus with their future low carbon versions.

Pierfrancesco Vago added: “We are pleased to be able to support this highly innovative project, as it further demonstrates our commitment to contributing to the development of next-generation advanced environmental technology for the benefit of the entire industry. This is a key element in our journey towards zero-emissions operations both at sea and ashore.”

MSC Grandiosa is MSC Cruises’ most-environmentally-advanced ship at sea yet and testament to the Company’s long-standing commitment to protect the seas and respect the communities that it touches. The ship is highly equipped with advanced cutting-edge technologies geared to ensure ever cleaner air emissions and improved overall environmental performance both while at sea and ashore.

In addition to a hybrid ‘closed-loop’ exhaust gas cleaning system (EGCS) which reduces ship sulphur emissions by 97 per cent, MSC Grandiosa will also be the first MSC Cruises’ ship to feature a selective catalytic reduction (SCR) system which helps reduce nitrogen oxide by 80 per cent. All other MSC Cruises ships currently under construction will feature the SCR technology including MSC Grandiosa’s sister ship, MSC Virtuosa, due to come into service in October 2020, as well as MSC Seashore, currently under construction at a different shipyard. This active emissions control technology conducts nitrogen oxide from the engine operations through a catalyst – a high-density device made from noble metals – and converts them into harmless nitrogen and water.

When speaking of alternative fuels, MSC Cruises is investing €5 billion in the construction of five LNG-powered ships. Compared to standard marine diesel, LNG reduces sulphur oxide emissions by more than 99 per cent and nitrogen oxide emissions by up to 85 per cent. It also largely eliminates particulate matter in the ship’s exhaust and reduces greenhouse gas emissions by as much as an additional 20 per cent. The 205,700 GT LNG-powered World Class ship MSC Europa will come into service in May 2022 and is the first of four futuristic World Class ships to be constructed at the French yard with further deliveries scheduled for 2024, 2025 and 2027. In addition, one Meraviglia-Plus ship will also be propelled by LNG when the ship comes into service in 2023.