Witness a Total Solar Eclipse in Antarctica with Abercrombie & Kent 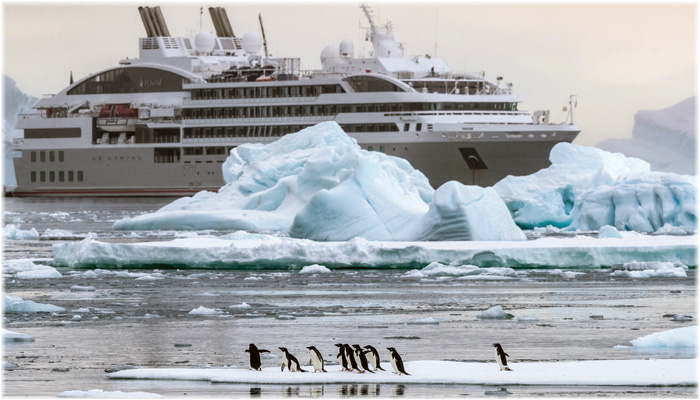 Embark on the ultimate adventure to Antarctica, where towering icebergs and massive glaciers set the stage for a once-in-a-lifetime phenomenon: a total solar eclipse.

All eyes will be on the sky throughout this voyage to the center of the eclipse’s path of totality, a band that stretches through the rarely-visited South Orkney Islands. A&K’s Luxury Expedition Cruise team selected the ideal location for the ship to be positioned: in a very narrow track on the surface of the earth where the radiating “circle of light” is best seen — weather, sea and ice conditions permitting — which will allow for a remarkable viewing time of approximately one minute and 40 seconds.

During a welcome event at Santiago’s Observatorio Astronómico Andino, Dr. David Crain will set the stage for the adventure ahead. Kathy Sullivan will share what it’s like to live in space, including the view from the Space Shuttle – 140 miles above the earth in in-board lectures and informal conversations. Dr. Massimo Terenghi, who spent his career working with state-of-the-art telescopes in Chile’s Atacama Desert, will provide tips on photographing the eclipse.

Dr. Kathy Sullivan, Astronaut, Geologist and Scientist
One of the first women to join NASA in 1978, Dr. Sullivan’s tenure also includes the distinction of being the first American woman to walk in space. She is the former Administrator of NOAA and currently serves as an Ambassador at Large for the Smithsonian’s National Air and Space Museum, travels the globe as a scientific expert and holds a Ph.D. in geology from Dalhousie University.

Dr. Massimo Terenghi, Scientist and Photographer
A former professor of astrophysics at the University of Milan, Dr. Terenghi has worked in leadership roles with the European Southern Observatory in Chile’s Atacama Desert. In addition to serving as the director of the ALMA telescope, he spent 17 years building the Paranal Observatory in Atacama. He’s won multiple awards, including the Bernado O’Higgins Grand Cross by the Chilean government and the Tycho Brahe Award by the Institute of Navigation, and now spends his time on astronomical photography.

Dr. David Crain, Scientist and NewSpace Entrepreneur
With a Ph.D. in Atmospheric and Space Physics, Dr. Crain has founded and co-founded several commercial space startups with an emphasis on weather observations. He has also been on several observational expeditions for past Solar Eclipses and currently serves as an Assistant Professor of Physics and Astronomy at Utah State University and Sam Houston State University.

These experts join members of an award-winning A&K Expedition Team, many who have been travelling to Antarctica for decades. These accomplished explorers range from pioneering scientists and recipients of the prestigious Polar Medal, to seasoned academics, photographers and field naturalists. Count on in-depth insight and hands-on guidance from an average of 18 A&K Expedition Team members, with a staff-to-guest ratio of 1 to 12.

These friendly pros accompany guests throughout the journey, offering fascinating lectures and kid-friendly activities at sea, guiding shore excursions, and sharing captivating stories about their adventures over meals.

“We’re bringing together some of the foremost experts in astronomy and polar expeditions for the ultimate polar adventure cruise,” explains Bob Simpson, A&K Vice President of Expedition Cruising. “The next total solar eclipse in this part of the world isn’t until 2061, which makes this a truly once-in-a-lifetime opportunity.”

For even more astral adventures, A&K is offering a 6-day pre-cruise extension to explore the Atacama Desert and the lunar landscapes of the Moon Valley. Visit the Paranal Observatory – alongside its founder, Dr. Tarenghi – for an exclusive behind-the-scenes tour, including a look at the world’s most advanced optical instrument, the VLT, or Very Large Telescope.

By chartering the luxurious mega-yacht ‘Le Lyrial’ in Antarctica, A&K is able to limit guest capacity to 199, which not only allows unrestricted access to landing sites prohibited to larger vessels, but also affords personalized attention on board the ship, as well as a private balcony in every stateroom. Pricing is all-inclusive, featuring arrival and departure transfers, gratuities and bar drinks, in addition to complimentary Wi-Fi and Traveller’s Valet® laundry service – exclusive A&K amenities.

Guests also have a choice of included excursions in Santiago, such as a bicycle tour of the city, a visit to an artist studio, a stroll through the city’s famed graffiti street art district, or a wine tasting in the Maipo Valley.

Onboard a fresh menu inspired by French culinary heritage encompasses everything from lavish multi-course dinners and international buffets to carefully-selected cheeses and freshly-baked pastries that rival those found in Paris. With a choice of two restaurants, no formal evenings, and 24-hour room service, guests have the flexibility to dine when and where they wish.

To ensure travellers have all the gear they need for their polar voyage (and not use up valuable luggage space), A&K provides an expedition parka, backpack and water bottle. Guests also enjoy complimentary use of boots, waterproof pants and trekking poles, delivered to staterooms, courtesy of A&K’s exclusive concierge service.

‘Le Lyrial’ boasts a 1C ice class rating and is one of the most environmentally-friendly ships to sail in polar waters, with cutting-edge technology that includes dynamic positioning and the most up-to-date wastewater treatment and recycling. The ship is “Cleanship” certified by the Bureau Veritas as operating with minimal impact on the environment.