Issues in India: Pandaw founder Paul Strachan writes about some of the challenges faced by Pandaw in India and responds to recent press reports on a collision 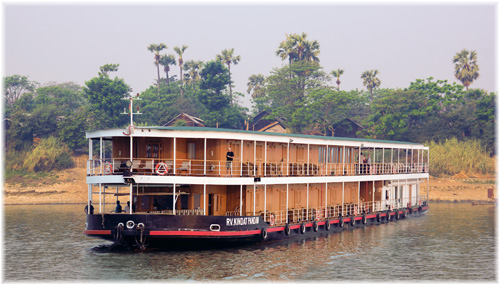 “No one said going back into India would be easy. Having pioneered Ganges cruising ten years ago we had some experience of the challenges of setting up in India.”

“However, reforms under Premier MODI have made investing and operating in India simpler and safer so we decided to give it another go and three ultra-shallow draft vessels were towed by tug over from Myanmar earlier this year, which in itself was a story. Our first recce voyage on the Lower Ganges last September went well, if a bit shambolically as a new crew on a new river found their feet.

Given the difficulties of management in India we appointed a local partner ‘Indus Cruises’ to manage the ships. Having just come back from India myself I was very pleasantly surprised by their progress. Long experience of set ups on new rivers in new destinations has taught me that it usually takes a year or two before a new routing streamlines. Indians are quick learners and they are getting there fast.

The seven night Lower Ganges expedition is now running well and crew have got up to speed on the service side and the excursions into the towns and villages of West Bengal get good feedback.

On the Upper Ganges challenges abound: one moment too much water and the next too little; groundings on sand banks are frequent; promised openings of pontoon bridges to allow us to pass can cause considerable delays.”