The 386-berth Viking Mississippi and intended sister ships start service in 2022 and reservations have now opened. Elsewhere we look at how cruise lines are using their own ships to repatriate cruise ship crews to their home countries until they are needed again. And we observe the passing of Capt Petr Golikov, well-known for many years as the master of the Kapitan Khlebnikov, who passed in Toronto last week.

Viking River Cruises has now announced the opening of reservations for the company’s new Mississippi River Cruises set to launch in August 2022.

“I am pleased to introduce a new, modern way to explore this great river,” said Viking chairman Torstein Hagen, announcing the cruises. “The Mississippi River is closer to home for many of our guests, and no other waterway has played such an important role in America’s history, commerce and culture.”

Under construction at the Edison Chouest Shipyards in Louisiana, the new Viking Mississippi is the company’s first custom vessel that will set sail in the US. With expansive windows and comfortable onboard amenities, the river ship will accommodate 386 guests in 193 all-outside staterooms on five decks.

The ship promises to be the largest and most modern cruise ship in the region, featuring a clean, contemporary Scandinavian design. In addition, many of the public spaces enjoyed by cruisers on Viking ocean and river ships have been adapted for the new ship.

Mississippi River itineraries touch on seven US states: from Louisiana to Minnesota and Illinois. These new itineraries will enhance tourism and economic development in many of the communities along the river.

Oddball items in recent cruise ship news bulletins have included cruise lines using their own ships to take crew home before entering their extended lay-ups. Crews’ ships, one might say, but with all this unemployed cruise ship capacity the owners are smart to use if they can and save having to pay airfares to get thousands of crew members home.

The first to hit the news this way was Royal Caribbean Cruises, which came up with a plan involving the 4,180-berth Spectrum and Ovation of the Seas, the 2,146-berth Radiance of the Seas and 3,114-berth Voyager of the Seas as well as the 2,852-berth Celebrity Solstice.

The Spectrum takes on crew from the Radiance, and then sail to Bali, Manila and Shanghai where crew will sign off as needed.

The company has arranged charter flights to India for Indian crew, who signed off in Bali last week.

Crew from the Celebrity Solstice will be moved to the Ovation and Voyager. The Ovation is now heading to Bali to disembark crew.

The Voyager will also receive crew, and is due at Manila for a late April call to disembark crew.

At Princess Cruises, the 3,560-berth Regal Princess will sail to Southampton and Rotterdam to take European crew home.

The 1,260-berth Veendam, 1,432-berth Volendam and 2,106-berth Nieuw Amsterdam will head to Asia to repatriate Holland America crew from the Philippines, Indonesia, India and South Africa.

Over at Carnival Cruise Line, the 3,954-berth Carnival Panorama sailed from Long Beach on Saturday with Filipino and Indonesian crew members. She in turn will be followed by the 2,124-berth Carnival Spirit.

Renowned polar explorer and veteran icebreaker captain, Petr Golikov, died on April 15, 2020 at North York General Hospital in Toronto. He had been admitted for observation due to pneumonia, but it was a four-year battle with lung cancer that Doctor’s believe caused his heart to fail. 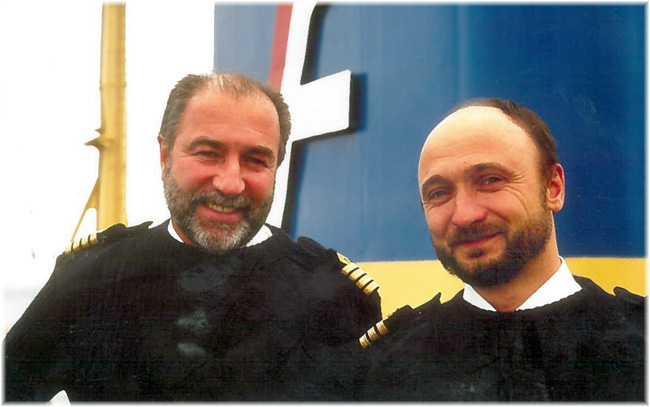 Petr is survived by his beloved wife, Natalia, his sons Alexander and Pavel, and by his daughter Maria.

A lifelong mariner, Petr was one of the most accomplished icebreaker captains of his generation. Born in Vladivostok on February 14, 1946, Petr followed in his father’s footsteps into the world of seafaring, studying at the merchant marine college and starting his career as a junior officer with the Far Eastern Shipping Company (FESCO).

In 1989 he was promoted to master of the Kapitan Khlebnikov, one of Russia’s most powerful diesel-electric icebreakers. The collapse of the Soviet Union in 1990 led FESCO to look to alternate employment for their vessels and so began a 30-year collaboration with US-based Quark Expeditions, the world’s leading polar travel company.

Petr immediately took to his new role of leading passenger expeditions to the most remote corners of the Arctic and Antarctica. He enjoyed his new “human” cargo and would often join his passengers in the bar or dining room to recap the day’s events. Among many other feats, Petr led two complete circumnavigations of Antarctica and many voyages into the uncharted waters of both the Weddell and the Ross Seas.

Golikov Bay in Antarctica was named in his honour when he achieved the most southerly voyage on record for a ship. At the time Petr was concerned if the Russian government would chastise him for risking the ship or laud him for the achievement. Fortunately it turned out to be the latter when then President Boris Yeltsin sent him his personal congratulations.

In the Arctic region Petr transited the Northwest Passage six times, led the first ever expedition to the geomagnetic North Pole and led the first ever passenger circumnavigation of the Arctic Ocean. Throughout these voyages at both Poles he assisted many Nations, bringing personnel and supplies to remote scientific outposts.

He immigrated to Canada along with Natalia and Pavel in November of 2004 when he joined the now Toronto-based headquarters of Quark as the Vice President of Ship Operations. Thus began a new stage of his career as a business executive negotiating complex ship charters and helping research and develop adventurous new itineraries for the company.

A memorial service and celebration of Petr’s life will be held in the autumn once borders are open again and his many friends from around the world can gather in his honour.