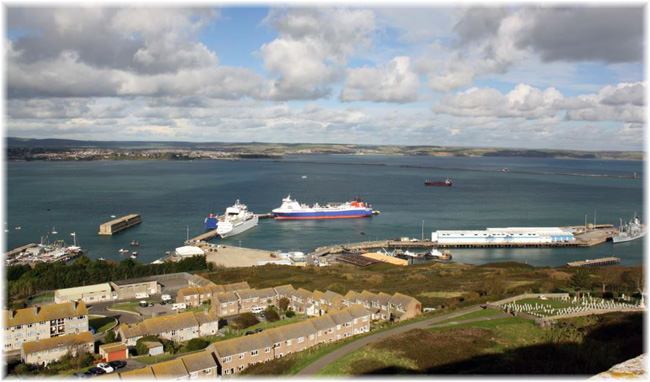 Whilst the coronavirus pandemic is having a major impact upon countless businesses in the UK, including those in the maritime industry, Portland Port remains open for business.

Ports are vitally important to the United Kingdom as they facilitate 95% of the country’s trade and ensure that UK markets have the products needed to keep the country running. Portland Port continues to play its role.

The appropriate restrictions and safety measures have been put in place to protect the port’s staff, contractors, customers and the local population. Where possible, port staff have been working from home since lockdown began, however this is not possible for all staff; pilots, marine officers, police and security are crucial to the port’s ability to operate and maintain its integrity. For those coming into the workplace, be it an office, tug or pilot boat, the social distancing rules are observed and there are supplies of hand sanitiser gel and the necessary PPE as required.

Prior to any vessel arriving in port waters or coming alongside they have to provide the necessary health declarations, and where necessary, the local Port Health Authority are consulted.

Even though the port remains open, it has experienced some drop off in business due to the current situation. With a reduction in construction activities during lockdown, cement imports to the port were temporarily suspended, but will start again this week.

However, some of the hardest hit businesses in the maritime industry, are the cruise lines. The cruise industry generates more than $150 billion per year in global economic activity and supports over 1.17 million jobs worldwide. Most oceangoing cruise lines took the unprecedented step to voluntarily suspend worldwide operations from 15th March, making the cruise industry one of the first to do so.

Portland Port’s cruise business, as with all ports around the world that receive transit or turnaround calls from cruise ships, has been massively impacted. The last ship to call was the Saga Sapphire on the 14th March, she was in the final days of her cruise before disembarking passengers and entering its suspension phase. 2020 was meant to be a record year for the port, with 44 ships and more than 75,000 passengers, however rather than ships, the port has seen the cancellation of its programme for April, May and June.

The next ship is not currently due until the 15th July, but it remains to be seen if cruising will be able to start again in that time. With changes still being made and the cruise line’s suspension being constantly reviewed, it is hard to predict how many cruise ships will have called by the end of the year.

The cruise ships may not be carrying out their normal transit calls at Portland Port, but they have been seen at anchor in Weymouth Bay. The global cruise fleet has been laid up and cruise lines have looked for the lowest cost options to park their ships, and the free anchorages in Weymouth Bay fit this bill. The ships that are utilising the free anchorage do not have any passengers on board and have been moving to and from the port of Southampton. Portland Port has offered its support to the whole of the cruise industry and it is hoped that it will see some vessels in harbour waters at some point.

Whilst the port may not be bustling, it continues to vigorously promote itself to the wider industry and prepare and plan for the future, an essential process for when the UK and the rest of the world starts the long road to recovery.