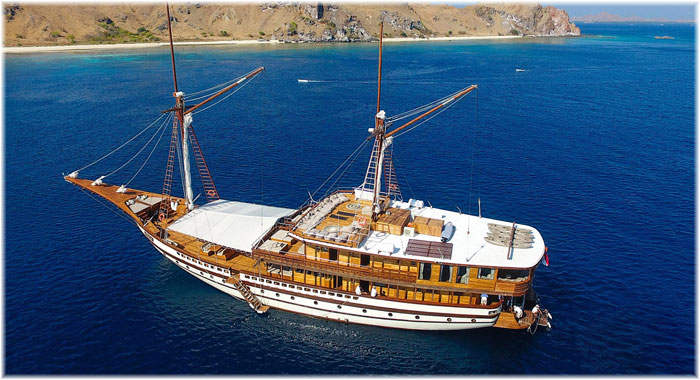 Prana by Atzaro, the world’s most luxurious charter Phinisi super-yacht based in Indonesia is to relaunch post coronavirus lockdown with some exciting new sailing routes from July 2020.

The two new itineraries, from Alor to Maumere (The Coral Triangle) and Labuan Bajo to Bima, will sail through the beautiful and remote islands of Indonesia, past active volcanic islands, pink beaches, waters teeming with marine life and some of the best diving sites in the world.

From Komodo Dragons to Whales, Manta Rays to Turtles, these trips offer the chance to see the wonders of nature up close and personal.

A beautiful hand-built boat, the biggest of its kind in the world, Prana by Atzaro can accommodate 18 people in nine luxurious suites. At just over 55 metres in length and 11 metres wide, Prana by Atzaro has been crafted in the style of a traditional Indonesian Phinisi, a sailboat with two masts built entirely of ironwood and teak according to traditional methods and recognized by UNESCO heritage, created by the founders of the luxury hotel group ‘Atzaro Group’, from Ibiza.

Sailing the stunning waters of the Alor archipelago in the heart of the Coral Triangle, Prana by Atzaro will journey west from the islands of Alor to Maumere (pictured below) on the ultimate 13-day, 12-night cruise through the unexplored islands of one of the most beautiful locations in the world.

Journeying past uninhabited jungle swathed islands edged with pristine beaches, volcanic outcrops and crystal clear waters teeming with marine life, crater lakes and the Batu Taru volcano on the small volcanic island of Komba Island in the Flores Sea, this voyage on Prana by Atzaro is a trip of a lifetime and the ultimate bucket list destination.

The Coral Triangle is a diving paradise and one of the best diving destinations in the world, with hugely diverse and densely covered reef sites, home to more than three-quarters of known coral species and 37% of the world’s coral reef fish. Home to six of the world’s seven species of marine turtle, as well as blue whales, sperm whales, mantas, dolphins and dugong, the area has the highest diversity of marine species, with more than 600 reef species of reef building coral – ten times more than the Caribbean Sea and over 2000 species of reef fish.

Komodo National Park is a mystical-looking cluster of islands rising out of the ocean like the scaly backs of enormous Jurassic reptiles. Also home to the famed Komodo dragon – it’s the only place in the world to see these prehistoric creatures.

This 11 day, 10 night trip will take you on a journey of a lifetime. Plunging savannahs, arid in the summer and bursting with life in the winter, deserted white and pink sand beaches, mountainous outcrops, ancient volcanoes, lakes, waterfalls and turquoise oceans teaming with marine life, the diving here is among the best in the world, with an incredible array of coral gardens, Manta Rays and turtles. while the East coast of Sumbawa for thrill-seekers, has fantastic snorkelling with Whale sharks.