After last week’s demise of Cruise & Maritime Voyages in the mid-size sector, this week’s news is exclusively from the small ship sector. The biggest news is the return of Swan Hellenic Cruises using two ships presently under construction in Helsinki for delivery to Vodohod in 2021 and 2022. Elsewhere, Norway’s Hurtigruten have announced four ex-UK cruises they intend to operate this September as the effects of the Covid-19 pandemic hopefully recede. And France’s Ponant, at the beginning of its own post-Covid 19 recovery is now up to operating eight ships.

John Warner, formerly vice-president, global sales of Toronto-based G Expeditions, is general manage of the new Swan Hellenic. Warner has had this idea for some time, having tried to revive Swan Hellenic at least as far back as February 2017.

The new company, with offices in Cyprus, Monaco and the UK, has acquired the Swan Hellenic brand and is thus now building two new expedition ships, each with seventy-six staterooms and aimed at providing for 152 guests with a crew of 120.

The first ship will be named in London in November 2021, before setting sail for Antarctica. The second will sail in April 2022 from St Petersburg en route to the British Isles and Iceland, before venturing into the Arctic summer of 2022.

After completing their Polar seasons, both ships will sail around the world, visiting a range of countries from New Zealand to Brazil and Papua New Guinea to the Philippines.
Warner, who is also UK managing director of Russian river cruiser Vodohod, said the new line would be “British in heritage and pioneering spirit, but international in its outlook.”

After a successful return to sailing the Norwegian coast on June 16 and international expedition cruises from Germany on June 26, Norwegian operator Hurtigruten has announced further plans to offer a full schedule of cruises, with fourteen of its sixteen ships returning to service in August and September.

Following on these successes, it has announced a series of four 5-night expedition cruises around the British Isles this September.

The newly-built (2019) Roald Amundsen will accommodate only 350 guests on each sailing, with with all cabins outside and half having their own balcony the opportunity to visit destinations such as the Isles of Scilly, Fowey, Rathlin Island, Fort William, Oban, Fishguard and Waterford, among others.

Anthony Daniels, UK general manager for Hurtigruten said, ”Having operated in Norway throughout the coronavirus pandemic, and having recently restarted regular operations in Norway, our robust health and safety procedures on and off board mean guests can relax and enjoy their UK short break.”

On Thursday of last week, French operator Ponant was able to announce that it had eight ships back cruising, with half of them operating itineraries within France. These included Le Lyrial sailing 7-night itineraries from Nice, L’Austral departing Marseilles, Le Bougainville from Bordeaux and Le Dumont D’Urville from Le Havre.

In addition, there is Le Bellot, cruising in Iceland, Le Boreal in Spitsbergen and Le Paul Gauguin in Tahiti, departing Papeete on a 7-night round trip.

The line has also stationed two ships, Le Soleal in Tahiti and Le Laperouse in New Caledonia, awaiting the green light from Australian and New Zealand authorities to cruise the South Pacific again.

Ponant will also restart its Kimberley cruises on board Le Laperouse  once state border closures in the Northern Territory and Western Australia are lifted.

Le Soleal and Le Laperouse are fully crewed and for the last four months, they have been waiting to cruise once borders reopen. The peak Kimberley season is between April and September but the season could be estended. 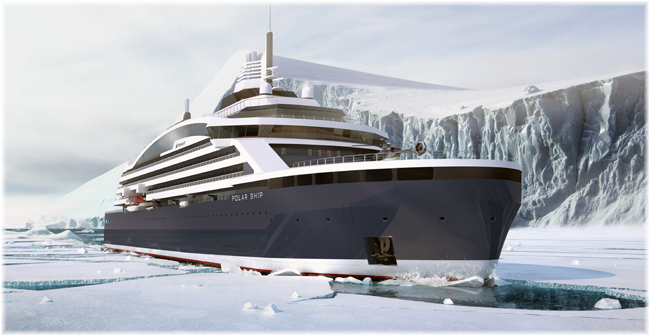 The line has introduced a string of stringent health and safety protocols before embarkation, while on board including social distancing with daily tracking and monitoring. It is also compulsory for guests to wear face masks in public areas and on Zodiacs. Restaurants will not serve buffets offering only table service.
There will also be reduced capacity at the ship’s theatre and entertainment venues.
If necessary, Ponant will cut back on passenger numbers but most of its ships can only accommodate up to 260 passengers or fewer anyway.

Ponant’s latest hybrid-electric polar exploration ship, the 270-berth Le Commandant-Charcot, will enter service next April, when she debuts in the Arctic.
Itineraries include voyages to the Geographic North Pole and the far reaches of the Antarctic down south, many of which remain unexplored.

Le Commandant-Charcot  will offer unprecedented experiences and activities such as viewing these icy panoramas from a hot air balloon, exploring by electric hovercraft, assisting scientists or, for the qualified, diving beneath the ice as well as dog-sled excursions.