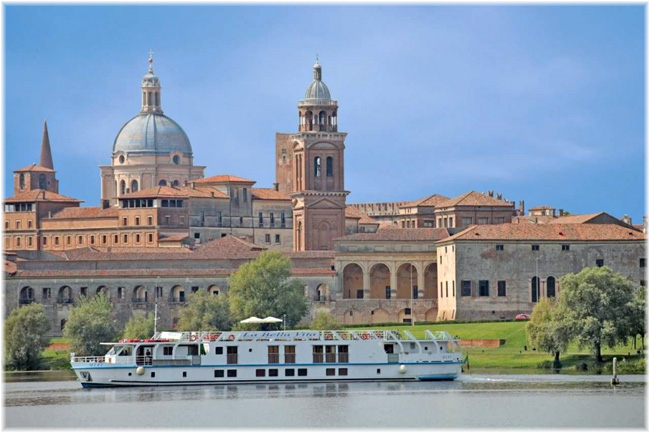 As travelers seek out “the great outdoors” after months of staying at home, they are looking at less crowded destinations where they can safely social distance. UNESCO World Heritage sites are a great option, since many are natural attractions that can be enjoyed in the fresh, open air.

European Waterways takes guests to some of the top UNESCO sites in Europe aboard their fleet of luxury hotel barges, offering the opportunity to see these wonders “up close and in person.” These include such famous attractions as France’s grand Canal du Midi – a masterpiece of hydraulic and structural engineering and one of the greatest constructions of the 17th century.

Originally used for transporting wheat, wine and textiles, the Canal du Midi fell into neglect for over 100 years with the introduction of the railroad. It enjoyed a renaissance as a popular tourist destination in the 1980s and 1990s thanks, in part, to barging visionaries such as European Waterways, which introduced travelers to its beauty, natural charm and engineering brilliance.

“Among the many UNESCO sites that are literary part of the ‘great outdoors,’ the Canal du Midi is in a class by itself,” said Derek Banks, managing director of European Waterways – one of the early barging pioneers on the canal. “We are pleased to have played a part in making it one of France’s most popular destinations, introducing travelers from all over the world to the fascinating and historically rich countryside surrounding it.”

Four on the Midi
Four of European Waterways’ luxury barges cruise various lengths of the Canal du Midi, which stretches 224 miles through picturesque countryside and sleepy villages to connect the Atlantic Ocean with the Mediterranean Sea. They include the 10-passenger Athos – a converted grain and wine barge; the 8-passenger Anjodi – a classic Dutch barge which made her first appearance on the canal over 35 years ago; the 8-passenger Enchanté, which offers a distinctive blend of luxury, spacious accommodations and style in the Midi countryside; and 8-passenger Rosa, which cruises the western end of the canal, close to Bordeaux.

In addition to the unique experience of floating upon this serene and scenic man-made marvel, guests can enjoy specialized cruises such as food and wine appreciation, family and multi-generational, biking, and golf. Excursions include tours of such historical sites as the UNESCO-listed medieval fortified city of Carcassonne, plus picturesque Minerve and Narbonne.

Vineyards and Churches
Other luxury barges in the European Waterways fleet introduce guests to their own respective UNESCO sites. In the summer, the 12-passenger Panache cruises the Champagne region, whose vineyards and wineries are UNESCO accredited. Guests also visit the stunning Cathedral of Notre-Dame in Reims; and later in the year, the barge travels on to the historic city of Strasbourg in the Alsace region of Northeastern France. Guests aboard the 8-passenger Renaissance hotel barge can marvel at the 12th century Château de Fontainebleau, while the 8-passenger L’Art de Vivre offers excursions to the hilltop abbey of Vézelay – a prominent pilgrimage destination.

On La Belle Epoque cruises, guests can visit the Abbaye de Fontenay in Burgundy; meanwhile, the unique Climats and Terroirs – the natural climate and rolling vineyards of Southern Burgundy – can be appreciated aboard the 12-passenger L’Impressionniste.

‘Veni, Vidi,’ Venice!
European Waterways’ unique Venetian luxury hotel barge, the 20-passenger La Bella Vita, treats guest to UNESCO sites that include Venice and its lagoons; the Renaissance cities of Ferrara and Mantua, and the Po Delta. The annual Opera Cruises also introduces guests to the city of Verona, another UNESCO site.

More information on the Canal du Midi and other UNESCO sites visited by European Waterways can be found at https://www.europeanwaterways.com/blog/top-unesco-sites-in-france/.

Book With Confidence
European Waterways’ “Book with Confidence” policy provides flexibility in rescheduling future cruises, should they be impacted by government restrictions. The health and safety of guests are also top priorities, with strict protocols in place that include crew and passenger temperature checks as well as deep cleaning and disinfecting of all cabins and public surfaces on the boats.