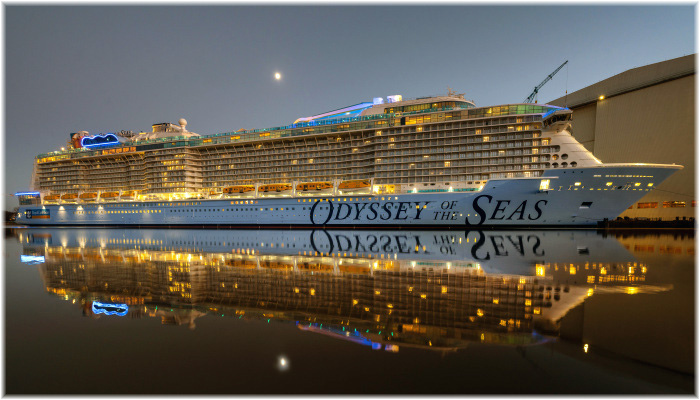 Setting course for a lifetime of adventure, Royal Caribbean International’s Odyssey of the Seas completed the final chapter in its construction odyssey today.

The highly anticipated marvel officially became the 25th ship in the cruise line’s award-winning fleet, following a virtual rendition of the time-honored maritime tradition known as a delivery ceremony. Odyssey will now set the stage for a bold, new way to vacation when it debuts from first-time homeport Haifa, Israel in May 2021 and Fort Lauderdale, Florida in November.

“Receiving Odyssey of the Seas into the Royal Caribbean family is a welcomed breath of fresh air. The ingenuity, passion and hard work our dedicated crew, teams on land and partners at Meyer Werft put into building a new ship always deliver, and to pull it off so well during a time unlike any other is incredible,” said Michael Bayley, president and CEO, Royal Caribbean International. “We are looking forward to delivering the memorable vacations we’re known for today on a ship that will mark several firsts for us, from making Israel a first-time homeport to introducing Quantum Ultra Class to North America. Every new ship is a blank slate to go bolder and be different, and Odyssey is bringing the very best of the new and guest-favorites across two continents for the years to come.”

Later today, fans will have front-row seats to the ceremony celebration during an untraditional Facebook premiere event – a first in the cruise line’s 52-year history. In store is a truly global lineup that includes the ship’s blessing led by Seafarers’ House at Port Everglades in Fort Lauderdale, a show-stopping performance from signature venue Two70 on board Quantum of the Seas sailing in Singapore, and executives of Royal Caribbean in Florida and Meyer Werft Yard in Papenburg, Germany. The celebration exclusively takes place on Royal Caribbean International’s Facebook page at 5 p.m. EDT.

Odyssey is the second Quantum Ultra Class ship, and just in time for summer, it will welcome Royal Caribbean’s first guests to cruise from Israel on sailings where travelers above the age of 18 and crew members are fully vaccinated.

Israeli residents can embark on 3- to 7-night getaways through October to visit sun-soaked destinations in the Mediterranean, including Rhodes, Santorini, Mykonos and Athens, Greece and Limassol, Cyprus. Following its inaugural summer season, Odyssey will embark on a transatlantic crossing for its North American debut this November, where it’s slated to offer 6- and 8-night Caribbean itineraries from Fort Lauderdale to idyllic ports of call like Aruba, Curacao and Perfect Day at CocoCay, Royal Caribbean’s game-changing private island destination in The Bahamas.

Weighing 169,000 gross tons and measuring 1,138 feet (347 meters) long and 135 feet (41 meters) wide, Odyssey will be the newest and largest ship to homeport in Israel and the first of its kind to call Florida its home later this year. Vacationers of all ages are in for a combination of 12 all-new and first-to-brand experiences as well as the signature adventures guests know and love, including:

Caribbean-inspired pool deck – Sporting a whole new look across two decks, Odyssey’s two open-air pools, four whirlpools and Splashaway Bay, anchored by a Quantum Ultra Class first – The Lime & Coconut bar – are designed for all travelers to enjoy the sun and stars in style.
SeaPlex – The next-generation of a longtime Quantum Class favorite, this SeaPlex is the largest indoor and outdoor activity center at sea, and debuts this venue’s first Playmakers Sports Bar & Arcade.
Giovanni’s Italian Kitchen & Wine Bar and Teppanyaki – Two Royal Caribbean restaurants new to North America join the varied lineup of dining options on board. The fresh take on the cruise line’s signature trattoria is the first to introduce its new wine bar concept while the other serves up East Asian flavors in the traditional Japanese style for which its named.
Action-packed top deck – Returning guest-favorites include the gravity-defying SkyPad virtual reality bungee trampoline adventure, FlowRidersurf simulator, skydiving with RipCord by iFly, and the iconic North Star all-glass observation capsule that boasts 360-degree views from 300 feet above sea level.
One-of-a-kind entertainment – In typical Royal Caribbean fashion, Odyssey’s full-scale productions take top billing in teched-out venues such as the Royal Theater and Two70, where immersive technology, unparalleled special effects and world-leading performers and aerialists take the stage alongside six agile Roboscreensfor a multidimensional live show.