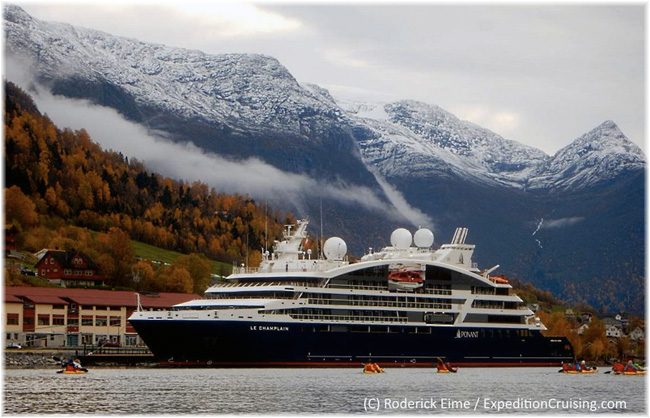 PONANT and Smithsonian Journeys, the travel program of the Smithsonian Institution, have formed a unique alliance to offer themed 2022 sailings featuring experiences that embrace local cultures and dive deeper into a destination’s history, cuisine, language, environment, and wildlife.

“As travel begins to resume, we believe guests will be more interested than ever in meaningful and enriching experiences that help to better interpret and understand the places they’re exploring,” Lynn Cutter, senior vice president of Smithsonian Travel, said in a statement.

In addition to the usual elements of the PONANT experience, the price for these voyages includes transfers to and from the ship, talks and discussions aboard ship by world class experts, and a shore excursion or activity in each port of call that immerses guests in the sights, sounds, tastes, and smells of each destination, and helps provide a deeper understanding of the places we explore.

Drawing on Smithsonian’s resources dating back 175 years, the new sailings will feature notable experts and experiences that embrace local cultures and dive deeper into a destination’s history, cuisine, language, environment, and wildlife. PONANT and Smithsonian Journeys share common values – focusing on cultural immersion and discovery – with a goal of further inspiring guests to become global citizens through travel.

This is Smithsonian Journey’s first alliance with an expedition line.

Nineteen departures exploring Antarctica, Japan, Iceland, the Mediterranean, British Isles, Great Lakes, and Norwegian fjords and more, will debut in 2022, and will provide opportunities to engage with a variety of experts, ranging from archaeologists and scientists to anthropologists and historians. The full list of voyages can be viewed here.

Panama and Costa Rica by Sea: The Natural Wonders of Central America, Le Champlain
Embark on an eight-day voyage from Colón, Panama to Puerto Caldera, Costa Rica passing through the Panama Canal. Ports of call include UNESCO World Heritage site Darién National Park for treks through the wilderness; an exclusive hosted visit at the Punta Culebra Nature Center at the Smithsonian Tropical Research Institute in Panama City; and Carara National Park, home to over 10,000 species of plants, 300 species of birds and 200 species of butterflies.
Departure on January 24, 2022 / 7 nights, 8 days

Treasures of Japan by Sea, Le Soléal
Sail from Kobe, one of the first Japanese ports to open to international trade in the 19th century, to Japan’s second-largest city of Osaka to explore how its rich heritage blends with the country’s industrialisation and modernisation. Highlights of the itinerary include an Udon-noodle master class at a Takamatsu cooking school; a visit to Hiroshima’s Peace Memorial Park; and a tour through Korakuen Garden, one of Japan’s Three Great Gardens in Okayama.
Departure on April 15, 2022 / 7 nights, 8 days

Cruising Southern Spain and Portugal, Le Bougainville and Le Champlain
Explore the Portuguese and Spanish coasts from Lisbon to Barcelona including a stop in Cádiz, from where guests will visit the oldest royal palace in use in Europe, the Alcázar de Sevilla. From Málaga, a true highlight includes a trip to Granada to enjoy a private after hours visit of the Alhambra. Guests will continue to Palma de Mallorca for an island escape before stopping in Valencia, where its history meets modernity with stops at both the UNESCO World Heritage site La Lonja de la Seda, originally used for trading silk in the early 1500s, and the cultural complex The City of Arts and Sciences.
Departures on May 3 and October 30, 2022 / 7 nights, 8 days

Iceland Voyage: Land of Fire and Ice, Le Bellot
Sailing roundtrip from Reykjavik, this voyage will include five ports of call exploring Iceland’s various landscapes including glaciers, fjords, volcanic rock, basalt pillars and soaring geysers. Guests will head to Grimsey, the nation’s northernmost territory and the ideal place to experience the midnight sun; before stopping at Heimaey, encased in a fortress of lava and home to 8,000 puffins, for an exclusive visit to the world’s first Beluga Whale Sanctuary.
Departures on June 6 and August 8, 2022 / 7 nights, 8 days

A Voyage Along the Great Lakes, Le Bellot
An exploration of all five Great Lakes in one voyage, this eight-day itinerary will depart from Toronto, on the shore of Lake Ontario. The journey continues through each of the lakes, passing sights such as Niagara Falls before sailing the length of Lake Michigan and ending in Milwaukee.
Departure on September 18, 2022 / 7 nights, 8 days