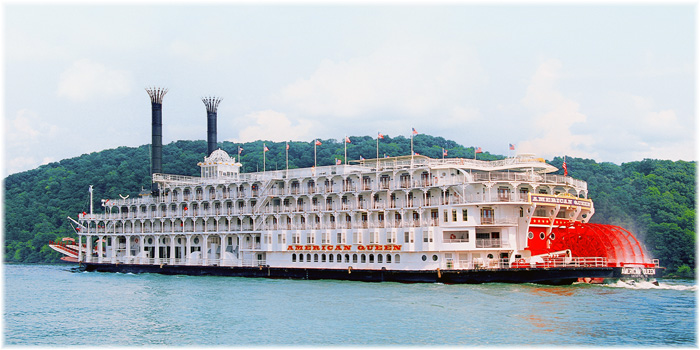 As the world’s largest and grandest paddlewheeler, the American Queen sets sail from New Orleans resuming the 2021 season on the Mississippi and Ohio rivers. As the flagship vessel, the American Queen’s return to service is an important milestone as it marks American Queen Steamboat Company’s 10th anniversary of the company closing on the purchase of the storied paddlewheeler (Aug. 8, 2011) almost a decade to the day.

“The purchase and restoration of the American Queen ushered in a new renaissance of U.S. River cruising ten years ago,” said John Waggoner, founder and chairman of American Queen Steamboat Company. “Our close-to-home cruise experience resonates more than ever, and I feel such pride seeing how far our offerings have expanded. Today the American Queen embarks from New Orleans, the American Empress® welcomes guests in Clarkston, Wash.; our boutique paddlewheeler, the American Duchess™, is docked under the Gateway Arch in St. Louis and our newest riverboat, the American Countess™, is calling on Nottoway Resort in White Castle, La.”

American Queen Steamboat Company bookings for 2021 and well ahead into 2022 and 2023 continue to reflect pent-up demand for cruising close-to-home. In addition, the cruise line reports 10+ record-breaking individual booking days in 2021, and the current sailing season is almost sold out with limited availability on remaining 2021 Thanksgiving- and holiday-themed voyages.

American Queen Steamboat Company is also offering the FREEDOM sale, a bonus savings of up to $2,000 on select 2022 bookings made by August 31, 2021.

“American Queen guests will have an immediate economic impact on the port cities she calls on from pre-cruise hotel stays to visiting attractions and patronizing small businesses along the river,” shares Shawn Bierdz, president of American Queen Steamboat Company. “To meet the needs of having the entire fleet operational, our company is up to over 500 team members once again and continuing to grow with open shipboard and shoreside positions.”

American Queen Steamboat Company began a phased restart in March under SafeCruise™ protocols and became the only fully vaccinated U.S. river cruise line for both guests and crew effective July 1. The 100% vaccination policy allows guests the freedom to cruise with confidence in accordance with the most current CDC guidelines. All guests must show proof of COVID-19 vaccination with their vaccination card prior to pre-cruise hotel check-in. SafeCruise policies are subject to municipality and state rules based on current regional conditions and may be modified without advance notice to adhere to local health and safety guidelines.