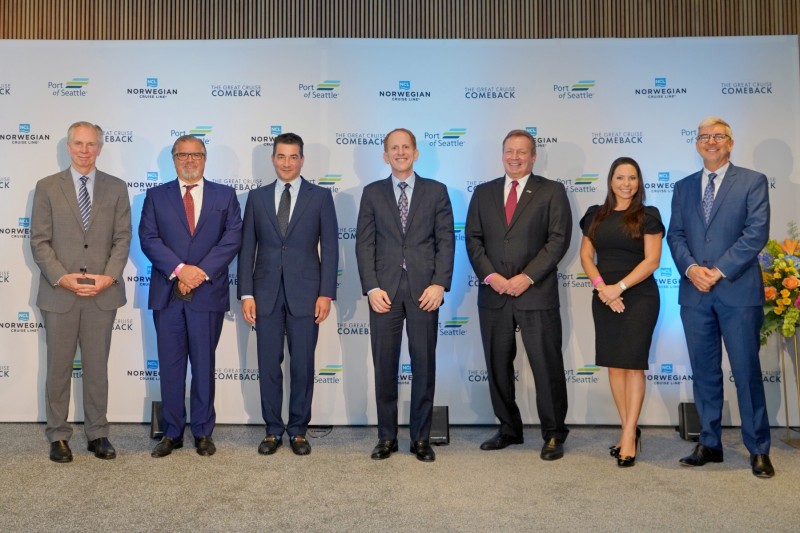 Norwegian Cruise Line, commemorated its highly anticipated return to cruising from the U.S. with the West-Coast debut of its newest innovative ship Norwegian Encore and a panel discussion featuring cruise line and government officials.

The event, which was live streamed and took place at the Port of Seattle’s Pier 66, invited travelers around the world to tune in to hear firsthand the Company’s commitment to a safe resumption of operations. The panel featured Norwegian Cruise Line Holdings Ltd executives including President and CEO Frank Del Rio, Andrea DeMarco, SVP of ESG and Investor Relations and Corporate Communications, and SVP of Commercial Development Steven Moeller; NCL brand President and CEO Harry Sommer; Stephen Metruck, Executive Director of the Port of Seattle and Dr. Scott Gottlieb, former Commissioner of the U.S. Food and Drug Administration and Chairman of Norwegian’s SailSAFE™ Global Health and Wellness Council.

The panel discussed Norwegian’s 21-year history with Seattle and the fact that the Cruise Line pioneered voyages to Alaska from the city. In addition, panelists discussed the impact of cruising to Seattle, with more than 1.3 million cruisers visiting Seattle each year. Moderated by Tom Norwalk, president and CEO of Visit Seattle, panelists also spoke about the cruise line’s unwavering dedication to elevating the guest experience on board coupled with the health and safety of its guests, crew and communities it visits. Participants also learned about NCL’s commitment to making a positive impact on society and the environment through its global sustainability program – Sail & Sustain.

“Today, was a very special day for the Company, for me personally and for our destination partners,” said Harry Sommer, president and chief executive officer of Norwegian Cruise Line. “The livelihood of so many of the communities we visit are closely intertwined to our highly-anticipated return. In Seattle alone, our guests contribute to approximately $288 million annually to the local economy. It has been a long journey for all of us, and I am incredibly grateful for the loyalty and collaboration of our guests, team members, crew and partners around the world that have allowed us to achieve this momentous milestone. Tomorrow, we will celebrate together when Norwegian Encore makes history as the first ship in the fleet to return to cruising from the U.S. in over 500 days and sets sail on her inaugural season of Alaska voyages.”