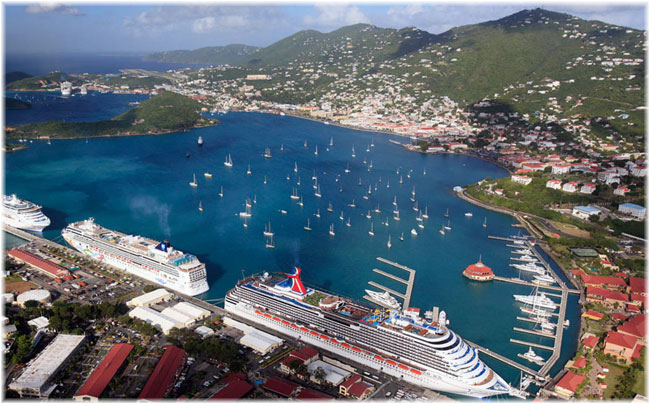 This partnership will enable growth to continue in this valued destination creating even more vacation memories that last a lifetime.

VIPA Executive Director Carlton Dowe also announced that in addition to guaranteed minimum revenues to VIPA and increased cruise visits to both St. Thomas and St. Croix, Royal Caribbean Group has expressed an interest in developing enhancements to the cruise facility in Crown Bay and making landside improvements in the Crown Bay District and St. Croix to enhance the island’s tourism products.

Dowe stated that this development signals an important boost for the territory’s economy and increased opportunities for businesses and entrepreneurs in the tourism sector in the USVI. “Royal Caribbean is the leading cruise company in the industry, and it has committed to a major infusion of capital as well as guaranteed cruise visits to our islands. In this currently strained economic climate, this substantial commitment indicates Royal Caribbean Group’s dedication to the people of this territory and our economy.”

Dowe added that VIPA is pleased to continue what has been an exceptional working relationship with Royal Caribbean Group. “This MOU extends what has been an exceedingly amicable, reliable, and beneficial arrangement for both parties. Our unified goal is to ensure that the U.S. Virgin Islands is a premier destination in the Caribbean,” he said.

VIPA will align with Royal Caribbean Group to expand the Austin “Babe” Monsanto Marine Facility in Crown Bay to allow the berthing that includes Icon- and Quantum-class ships and the development of a third berth. The vision for the Crown Bay District will complement the Port Authority’s plans to revitalize the district to appeal to residents and cruise visitors.

Royal Caribbean Group has also committed to partner with VIPA and the Government of the USVI to develop and enhance the overall visitor experience in St. Croix.

“The U.S. Virgin Islands is one of our best destination partners and the opportunity to continue innovating on ways to refine the guest experience helps guide our decision to expand our already strong relationship with the U.S. Virgin Islands,” said Carroll. “We thank Governor Albert Bryan Jr., the VIPA Board of Governors, Commissioner of Tourism Joseph Boschulte and Executive Director Carlton Dowe and his team for collaborating on this exciting opportunity to develop destination experiences that benefit tourists and citizens of the USVI.”

The U.S. Virgin Islands recently started receiving cruise visits to its islands following the halt of cruising in March 2020. Most of the territory’s cruise visits have been Royal Caribbean International and Celebrity Cruises vessels. Celebrity Edge was the first ship to call on St. Thomas on July 20, and in St. Croix, Celebrity Equinox was the first ship to berth since the pandemic on August 8. VIPA has had 22,991 cruise visitors to the territory since July 2021, making it one of the most visited cruise destinations in the world.

Royal Caribbean Group (NYSE: RCL) is one of the leading cruise companies in the world with a global fleet of 60 ships traveling to more than 800 destinations around the world. Royal Caribbean Group is the owner and operator of three award-winning cruise brands: Royal Caribbean International, Celebrity Cruises and Silversea Cruises, and it is also a 50% owner of a joint venture that operates TUI Cruises and Hapag-Lloyd Cruises. Together, the brands have an additional 13 ships on order as of June 30, 2021.

The Virgin Islands Port Authority (VIPA) is an autonomous, self-sustaining government agency established in 1969 as the owner and manager of the United States Virgin Island’s airports and seaports. VIPA operates 14 seaports, two airports, and surrounding properties. It is a critical arm of the USVI’s economy that facilitates travel and commerce and fosters tourism and economic growth via its port activities. VIPA’s mandate is to develop and maintain the ports of the USVI to accommodate the current and future demands of our users and to provide safe port facilities.