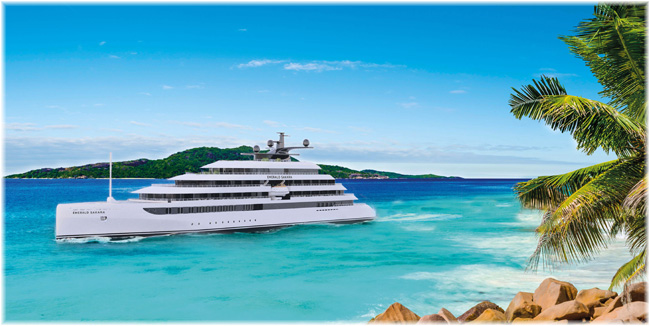 With the 2023 Luxury Yacht Cruise Collection second edition brochure release, Emerald Cruises has unveiled the details of its new destination – the Seychelles – on board the recently announced Emerald Sakara, joining Emerald Azzurra in 2023.

This is the first time that details of Emerald Sakara’s inaugural season and itineraries have been revealed.

The itinerary will call at the islands of Sainte Anne, Cousin, Praslin, Grande Soeur, Curieuse, La Digue and Aride – all in the Seychelles. Marking not only the launch of the new superyacht, but also Emerald Cruises first sailing in the Indian Ocean.

Highlights of the itinerary include an exploration of Sainte Anne Marine National Park, with its pristine sandy beaches, coconut trees, crystal-clear waters, polychromatic coral reefs and rich marine biodiversity; an orientation of Cousin Island, which, thanks to conservation efforts, has become one of the most significant nesting sites in the world for turtles; and a discovery of Aride Island, a nature reserve hosting one of the most substantial seabird populations in the Indian Ocean. (Departing 23 February 2023).

In addition to the new Indian Ocean sailing, four further itineraries will depart for the first time in 2023 – including two new itineraries in the popular Black Sea region.

While the 22-day Discover the Greek Islands, Turkey & the Black Sea itinerary sails the same as above, with additional days sailing the Aegean Sea with calls at Patmos (Greece), Kuşadasi, Bodrum (both Turkey), Rhodes and Amorgos (both Greece). (Departing 17 June 2023 on board Emerald Sakara).

The 12-day Ancient Wonders of the Red Sea & Mythical Greece will set sail from Saudi Arabia – a destination recently added to the Emerald Cruises portfolio for 2022 sailings – taking guests from Jeddah to Athens, calling at AlUla, Duba, Aqaba (Jordan), Sharm el-Sheikh (Egypt), Ain Sokhna (Egypt) and Agios Nikolaos (Greece) en route. Highlights include a stop in the ‘Pearl of the Red Sea’, Duba, and a guided tour with included lunch to Jordan’s famous archaeological site of Petra. (On board Emerald Sakara).

On the 21-day Discover the Red Sea, Holy Land, Turkey & Greece journey, guests will sail from Aqaba (Jordan) to Athens, calling at Hurghada, Ain Sokhna, Alexandria (all Egypt), Ashdod, Haifa (both Israel), Limassol (Cyprus), Paphos, Rhodes (both Greece), Bodrum, Kuşadasi, Çanakkale, Istanbul (all Turkey), Volos and Ermoupolis (both Greece) along the way. Guests will enjoy a visit to the Great Pyramids of Giza, a Nile felucca cruise and a concert at Apollo theatre in Emourpolis, all included departing 25 January 2023 on board Emerald Azzurra.