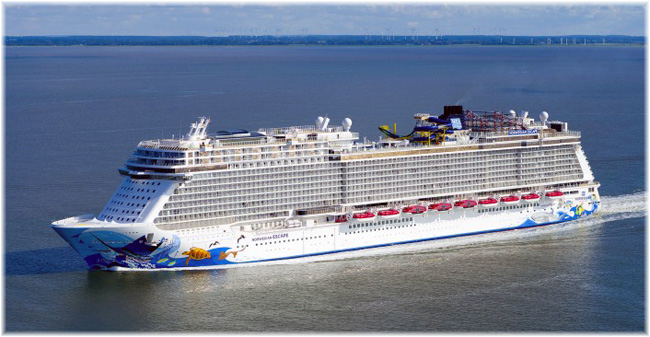 “We have welcomed back more than 110,000 guests worldwide as part of our global redeployment efforts,” said Harry Sommer, president and chief executive officer of Norwegian Cruise Line. “Our Great Cruise Comeback stems beyond the relaunch of our vessels but also the return of our shipboard team members who have been excited to return to deliver unforgettable vacations experiences to our guests.”

Norwegian Escape will sail from Port Canaveral near Orlando offering seven-day voyages to the Eastern Caribbean visiting major ports including Tortola in the British Virgin Islands, St. Thomas in the U.S. Virgin Islands and Great Stirrup Cay, the company’s private island in the Bahamas.

On Dec. 23, 2021, she will embark on an 11-day holiday journey visiting nine destination-rich ports of call where guests can celebrate Christmas Day in Puerto Plata, Dominican Republic and partake in New Year’s Eve festivities in St. Thomas, U.S. Virgin Islands before continuing their voyage to Bridgetown, Barbados and St. John’s Antigua.

NCL’s Great Cruise Comeback to redeploy its entire fleet began on July 25, 2021 when Norwegian Jade was the first vessel to set sail with seven-day itineraries to the Greek Isles after a 500-day suspension. Since then, the Brand has relaunched seven additional ships with more vessels to resume operations in December 2021 and into 2022.

The Company’s fleetwide redeployment will continue in partnership with local governments and are guided by the robust protocols of the Company’s Sail Safe health and safety program, which at its cornerstone requires that all crew and guests must be fully vaccinated to embark on all NCL voyages for the foreseeable future. Working with the leading experts of the SailSAFE™ Global Health and Wellness Council, the robust protocols will be regularly evaluated and modified as needed, making science-based decisions to protect guests, crew and the destinations it visits. As protocols evolve and additional information becomes available, updates will be published at www.ncl.com/sail-safe.

NCL invites travelers to witness its return to cruise journey with its pioneering five-part docuseries “EMBARK – The Series,” showcasing a behind-the-scenes look at the ongoing measures for a healthy and safe return to cruising. The entire first season is available on-demand at www.ncl.com/embark. Watch all five episodes and the full suite of EMBARK content including Stories and Spotlights.