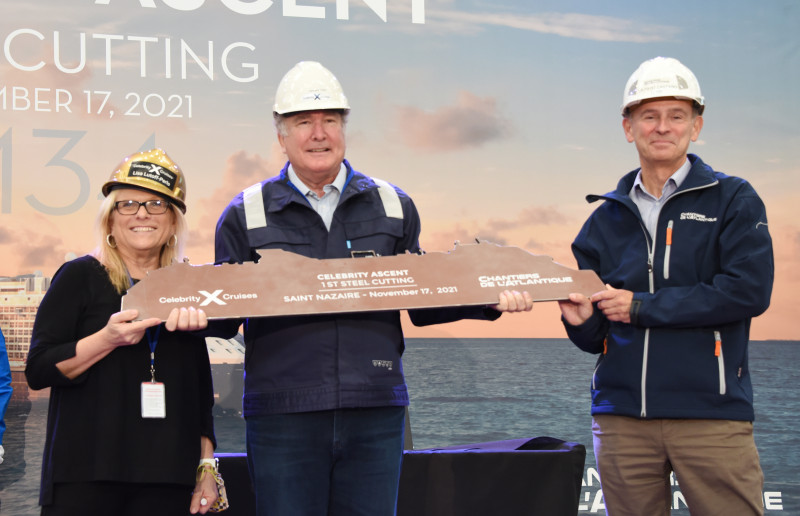 As company executives signed the ceremonial first cut of steel for the fourth ship in Celebrity Cruises’ award-winning Edge Series at the Chantiers de l’Atlantique shipyard in Saint-Nazaire, France, the cruise line that took consumers to the Edge® and ApexSM of luxury travel, and will soon show consumers BeyondSM what anyone thought possible for a cruise ship, revealed it will climb even higher with the beginning of construction on Celebrity Ascent.

The ceremony signaled the next chapter in a remarkable year for Celebrity Cruises as it led the cruising industry out of the pandemic with Celebrity Edge, the first ship to sail from a U.S. port on June 26, 2021; formally launched the second Edge Series ship, Celebrity Apex, in an emotional naming ceremony on Nov. 2, 2021; and shared more details throughout the year on the series’ third ship due in late April, 2022, the highly-anticipated Celebrity Beyond.

“The name of this new ship is very apropos as the industry rebounds, but also as Celebrity continues to lead the industry as an unmatched new-luxury brand and cruise line,” said Richard Fain, Chairman and CEO of the Royal Caribbean Group, the parent company of Celebrity Cruises. “Celebrity Ascent will take the industry to new heights as it pushes the boundaries of what people can experience on a ship and how they experience it.”

“What another wonderful moment for our brand, our company and our industry to be in this incredible shipyard making the traditional first cut of steel on this magnificent ship and signaling the bright future that lies ahead,” said Lutoff-Perlo. “While I wish I could share what we have in store for this ship, I can tell you our ‘Ascent’ will be Celebrity Beyond’s sister ship in every way, and then some.”

“This is a momentous occasion and a new milestone in the long success story we have with Celebrity Cruises and the Royal Caribbean Group,” said Laurent Castaing, General Manager, Chantiers de l’Atlantique. “Celebrity has been on the forefront of pushing the industry forward on multiple levels, and it’s our privilege to partner and collaborate with them as we bring Celebrity Ascent to life.”

Celebrity Ascent is expected to make her debut in early 2023.