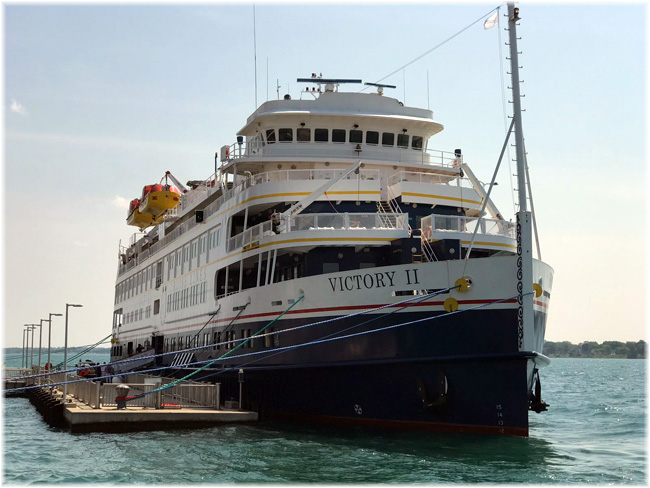 American Queen Voyages™, part of Hornblower® Group, announces Victory I® and Victory II™, will be renamed “Ocean Voyager” and “Ocean Navigator” when the vessels re-enter service in early 2022.

Ocean Voyager begins her 2022 season January 4th with immersive Mexico and Yucatán Peninsula itineraries and Ocean Navigator will debut in Savannah April 10th, sailing up the eastern seaboard towards the Great Lakes for the summer season. The two vessels are currently in Port Royal, South Carolina undergoing minor renovations preparing for the upcoming season.

“The transformation of our small-coastal vessels to Ocean Voyager and Ocean Navigator was a natural next step as we introduce our American Queen Voyages Lakes & Ocean experiences,” explains Shawn Bierdz, chief operating officer of American Queen Voyages. “Ocean Voyager and Ocean Navigator will deliver encounter travel with innovative itineraries and enrichment programming showcasing the best of North America’s unique waterways.”

Guests can also lounge above deck on comfortable, cushioned outdoor sofas or lounge chairs and enjoy an afternoon cocktail, evening sunset or a little late-night stargazing. Embracing the tagline “Discovery runs deep™”, American Queen Voyages Lakes & Ocean offerings invite travelers to throw away the guidebook and go off the beaten path to discover the unscripted experiences of North America.

These intimate, agile ships were purposely built to navigate the canals and locks of the Great Lakes and St. Lawrence Seaway. Itinerary offerings include departures from Chicago’s Navy Pier to downtown Toronto over 11-days, touching all five Great Lakes along with sailings between Detroit and Montreal.

These vessels’ unique size also allows flexibility to explore regions including the southeast United States and even Mexico’s Yucatán Peninsula. Diverse cultures in the U.S. and Canada through some of its most historic ports including Mackinac Island and showcase a different perspective of New England. Cities like Charleston and Savannah offer a glimpse into coastal southern living – all seen completely different by small-ship.

“The evolution into American Queen Voyages has enabled us to blend elements of the guest experience enjoyed from our River vessels into the Lakes & Ocean experience onboard Ocean Voyager and Ocean Navigator,” shares David William Kelly, executive vice president of vessel operations for American Queen Voyages. “We are currently making minor adjustments to these vessels, training their crews and look forward to guests experiencing for themselves soon.”

American Queen Voyages is currently offering a special Year End Sale with savings of up to $5,600 per stateroom on select 2022 and 2023 sailings including Ocean Voyager and Ocean Navigator when booked by January 4, 2022.