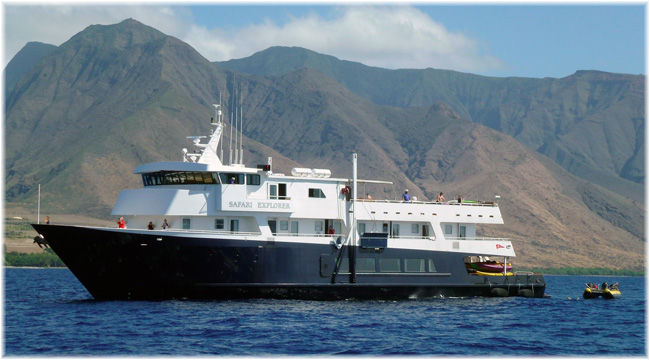 UnCruise is the sole small ship company currently operating overnight interisland adventures. The 36-guest “Safari Explorer” kicked off her winter season with in-depth cultural immersion in Halawa Valley on the island of Molokai.

Recent news proved to be a major setback for large ship cruise lines that were forced into canceling cruises in Hawaii until 2022. UnCruise Adventures does not fall into the large cruise ship ranks and has received permission to operate in ports and parks in Hawaii.

The company worked diligently with the Hawaii Department of Health to gain approval of the company’s 100% full vaccination and testing requirements for all guests and crew. UnCruise is now celebrating 12 years of operations in Hawaii with their 7-night Hawaiian Seascape adventures from Molokai to the Kona Coast and reverse.

“It’s time to focus on our guest’s experience and the people and culture of Hawaii,” states UnCruise Adventures owner, Captain Dan Blanchard. “After almost two years of very limited travel, we are celebrating the permissions granted to us, and our ability to share an immersive exploration of the Hawaiian Islands, including the less-traveled island of Molokai, whose people and culture have become a part of the UnCruise Adventures family. We continue to work with the counties of Maui and Hawaii on operational details.”

Guests on the Hawaiian adventure can immerse themselves in the heritage and living culture of the locals while sailing from Molokai to Maui, Lanai, and the Big Island of Hawaii with multiple adventures each day. The itinerary highlights the UnCruise focus on community, culture, and connection. The Hawaiian Seascapes itinerary visits four islands in one week and includes Halawa Valley, Hualalai Volcano, and Kealakekua Bay as examples of just three of the focal points along the route.

Blanchard shares: “We have worked diligently to ensure that Hawaii’s residents are safe and confident in our operations. The support shown by Hawaii government officials has been invaluable in routing a path for our guests to experience these beautiful islands. It is humbling to be granted permission to operate. Mahalo to the many officials and residents of Hawaii that support our experiential adventures.”