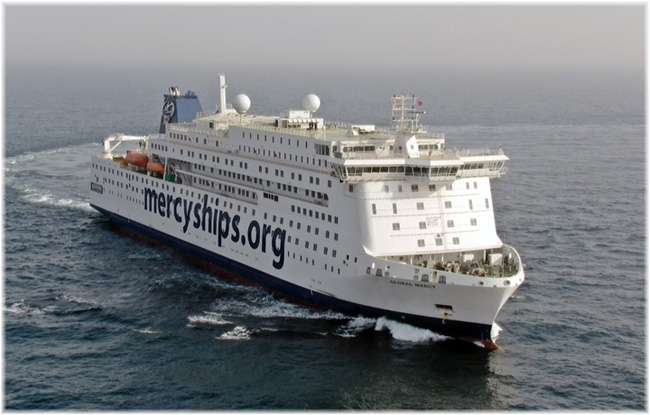 From February 28 to March 14, the world’s largest hospital ship, the “Global Mercy”, will be in Rotterdam. A momentous event for Stena RoRo who, on behalf of the charity Mercy Ships, has been the project manager for the ship’s construction since 2013.

During her weeks in Rotterdam, the newly built ship will be open to visitors. Private individuals, organizations, partners, donors, volunteers and the media are welcome to visit the ship while she is being outfitted in Rotterdam for its vital mission in West Africa.

From February 28 to March 14, completion of the newly built Global Mercy – the world’s largest civilian hospital ship – will be celebrated and she will be open for tours. Stena RoRo has been responsible for the design, contractual arrangements and site supervision of this very special marine construction project.

Hospital activities to be carried out on board entail specific requirements that influence everything from the design and layout of the hull to ventilation and other technical solutions. The ship houses operating rooms and hospital wards, a lab, eye clinic, dental clinic, training facilities and all that is needed both for in-patient care and those working on board, including schools and nursery schools for the crew’s children. The Global Mercy is rated for passenger service and, when in port, can accommodate 950 people including a crew of 641.

“When we were commissioned to build the Global Mercy, we began with an existing concept for passenger ships and freight for long-distance international RoPax service,” says Per Westling, managing director for Stena RoRo. “We designed her as a pure passenger ship with hospital services instead. The car deck has been replaced by operating rooms and hospital wards.”

To meet the special challenges, Stena RoRo created a global project with subcontractors from around the world. Construction was carried out at the Tianjin Xingang shipyard in northern China where Stena RoRo has had an international team on site for monitoring the construction process.

“It was the first time the shipyard had built this type of ship and we wanted to carefully monitor the process. We are very pleased with the collaboration we’ve enjoyed as well as the standard of the completed vessel.”

The Global Mercy has been built on behalf of the charity Mercy Ships which via hospital ships, provides free medical care and expands local healthcare capacity for the world’s most vulnerable human beings. The ships are staffed by volunteers from more than 60 countries. The Global Mercy is the first of the charity’s ships to have been designed and built specifically for their needs. Previous ships have been converted into hospital ships.

With the Global Mercy, their capacity to provide help is more than doubled. The new ship will come alongside the Africa Mercy, in operation since 2007. With both ships in service, Mercy Ships expects to conduct more than 5,000 operations each year, treat over 28,000 dental patients and train more than 2,800 local healthcare staff.

“It’s big seeing this project come to a close after so many years of engagement on our part,” says Per Westling. “We are extremely proud to have delivered such a special ship and to thereby be part of the amazing work of Mercy Ships.”

Celebrations and activities in Rotterdam

In Rotterdam, final outfitting is underway ahead of Global Mercy’s departure for Dakar in Senegal. Alongside celebrations and the ship being open to visitors, there will be guided tours both onboard and virtually (https://globalmercy.org). Mercy Ships hopes that the general public, donors and potential volunteers will take advantage of the opportunity to see the ship and get a clearer picture of life on board for both patients and volunteers. A special invitation is going out to the media, and they will be able to meet volunteers and several of the project’s key figures, including Stena RoRo’s managing director Per Westling.

February 28 – March 14: Open to visitors. For registration and more information:

Public Event for the Press

A global project under Swedish management

The project started back in 2013. Swedish Stena RoRo has been responsible for the design, contracting and site supervision of this unique and global project. French Barry Rogliano Salles, BRS, has served as the broker, detailed design by Finnish Deltamarin and construction has been carried out at the Tianjin Xingang shipyard in China. The Global Mercy, classified by Lloyd’s Register in the United Kingdom, sails under the Maltese flag and operate along the coast of Africa.

Through its hospital vessels, Mercy Ships provides free high-quality healthcare, building up healthcare capacity and providing sustainable development to those with the least resources. Mercy Ships was founded by Don and Deyon Stephens in 1978 and has since operated in more than 55 developing countries, contributing care and development worth more than SEK 17 billion and treating more than 2.8 million people. Ships’ crews consist of approximately 1,200 volunteers each year from more than 60 countries. They are surgeons, dentists, nurses, nursing educators, teachers, chefs, sailors, engineers and agricultural experts who volunteer their time and skills. With offices in 16 countries and an African center, Mercy Ships strives to make a difference for individuals and to assist nations.