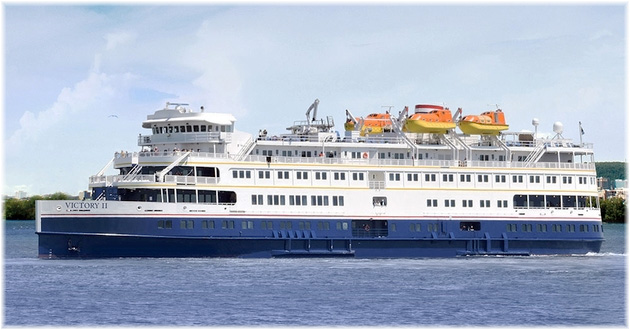 Sailing departures for 15-day voyages are September 5 Montréal to Chicago, September 18 Chicago to Montréal and a 12-day roundtrip Montréal Oct. 1, 2022.

As an added bonus for ‘leaf peepers,’ the 12- and 15-day voyages depart during the heart of autumn onboard the Ocean Navigator™ , offering spectacular views of regional fall foliage.

“Our valued-travel advisors and guests shared how much they enjoy overnights in port while cruising Europe, so we adjusted these autumn voyages to offer opportunities to explore similar storied ports after the sun goes down here in North America,” shares Shawn Bierdz, chief operating officer, American Queen Voyages.

“Sunset strolls along the cobblestone streets of Old Montréal and sipping a warm cider during a Mackinac Island carriage ride are among the moments our guests can now enjoy.”

Ocean Navigator welcomes up to only 202 guests, delivering immersive Lakes & Ocean experiences in North America sailing the Great Lakes, Canada, New England, Southeast U.S.A., Yucatan & Mexico. During these newly announced sailings the boutique coastal vessel will call on the ports of Clayton, N.Y., in the heart of the Thousand Islands region, and Port Weller, Ont. for the first time.

Mackinac Island
The entirety of this charming island is a National Historic Landmark where motor vehicles are not allowed, so explorations of Fort Mackinac are done by horse-drawn carriage. Guests may visit the iconic Grand Hotel for a sunset cocktail and explore its fabled grounds under the stars. The coastal resort, famed for hosting presidents, authors and inventors, is also known for having “The World’s Longest Porch.”

Toronto
Unlike the USA’s “melting pot” concept, Toronto can be described as more of a “tossed salad” of ethnic groups. Toronto is the leading destination for tourists in Canada – a bold, dynamic city offering superb attractions, music and events. Considered Canada’s premier metropolis, the bustling city also provides diverse dining delicacies and a variety of culinary pursuits, including St. Lawrence Market, where the flavors of Toronto have come alive in authentic artisan foods for more than 200 years.

Montréal
Despite being conquered by the British, French Montrealers continued to flourish and exist as the majority on the island over the subsequent decades. This included city tour will showcase attractions that are urban wonders steeped in history. Guests will also have time to visit restaurants, music venues, and galleries well into the night.

Québec City
The old-world charm of this ramparted enclave beckons visitors from around the globe. From a raised mound of earth, Château Frontenac – now a hotel – towers toward the heavens over Upper Town, evoking the grandeur of a country estate. Within moments of appreciating the city’s sleek gentility, guests feel as if they are whisked across the Atlantic for a European getaway. An evening cocktail and charcuterie board at a local bistro will be a favorite dining activity in Québec City for many.