Port of Heraklion, in Crete, announces the opening of the cruise season 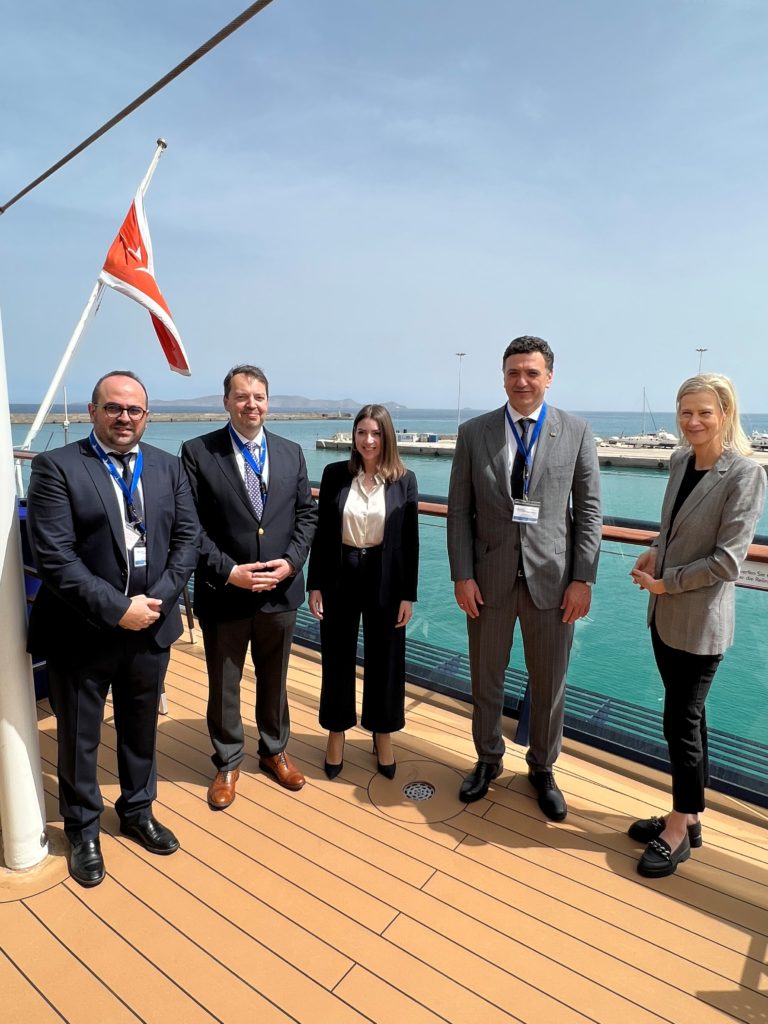 This exceptional importance event was also the opening of the homeport cruise season and was organized with the kind cooperation of TUI Cruises, as part of Mein Schiff 5 welcome ceremony, which chose for the second consecutive year the Heraklion Port as a homeport for the Mediterranean Sea itineraries. Mein Schiff 5 will operate round trip itineraries from Heraklion Port to the Aegean Sea and alternatively to the Ionian Sea in 7 days cruises.

In the framework of cruise inauguration, the vessel’s Master Captain George Dimou welcomed the official guests, giving the floor to the Minister of Tourism Mr. Kikilias sharing the most optimistic message for the Tourism season describing Crete as the country’s tourism flagship, as well as the Heraklion Port importance for its contribution to the cruise development, giving praise to the Management of OLH SA and especially to the CEO Mr. Minas Papadakis and his associates and partners for their efforts.

The Secretary of the Aegean Sea and Insular Policy Mr. Koutoulakis thanked also all tourism partners and expressed his optimism for a very good tourism season and attributed the cruise tourism development to the overall and organized efforts of OLH SA administration.

The event host, OLH’s CEO Mr. Minas Papadakis after welcoming the Minister of Tourism and the Secretary of the Aegean and Insular Policy, stated that the Port of Heraklion is one of the main cruise ports of the country, both as homeport and transit port with this cruise season expected to be double both in calls and cruise passengers terms. Cruise business considered by OLH’s management one of the main pillars of development that contributes significant economic and social benefits both locally and nationally.

Furthermore, CEO Mr. Minas Papadakis, referred to the current social concerns, emphasized on sustainable development and the green transition that will lead to zero greenhouse gas emissions. In both directions, important initiatives and a specific action plan are taken by OLH, mainly with the planning of shore power supply to the docked vessels in Heraklion Port. Also, he focused on one of the city’s most emblematic tourist sites, the Venetian Castle of Koule and the implementation of the architectural lighting where all the necessary approvals have been obtained from the Ministry of Culture, while the financing of the project has been approved by the Ministry of Mercantile Marine and Insular and Policy.

The event was concluded by the CEO of TUI Cruises Mr. Wybcke Meier, who stated that the Heraklion Port as homeport considered as the first choice for visitors to the Mediterranean Sea and the most important destination for TUI Group in SE Med.

Common place of all speeches is focused on the optimistic messages for the tourism and cruise season and especially for the Heraklion Port homeporting which is expected to be doubled from the past year. This result was granted as result from the immediate and safe last year’s cruise restart, proving the importance of Heraklion Port, due to its excellent port services, the support it offered during the pandemic to cruise lines and obviously its strategic location. With no doubt, Heraklion Port considered again as one of the best cruise and multipurposed ports in the Mediterranean and Europe as well, contributing to the Greek tourism development in general.