Havila Voyages took delivery of its second ship, Havila Castor, at the Tersan shipyard in Turkey 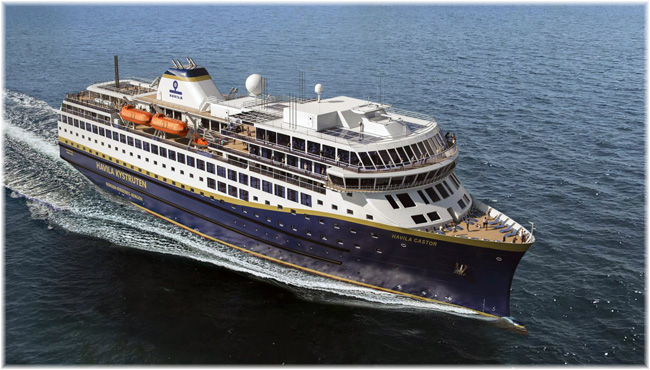 On Friday 22nd of April, Havila Voyages took delivery of its second ship, Havila Castor, at the Tersan shipyard in Turkey. Havila Castor will start sailing the coastal route Bergen – Kirkenes on Tuesday 10th of May.

Chairman of the board and main shareholder Per Sævik was involved in the official takeover of the yard in Turkey.

“It is always extra special to be part of the delivery of new ships. She is a great sight that we look forward to seeing along the Norwegian coast”, says Sævik.

Bent Martini, CEO of Havila Voyages, talks about great joy after some challenging Easter days with a canceled round trip for the sister ship Havila Capella.

“This is a big day for our shipping company, and now we are ready to get Havila Castor home to Norway to be put into service on Tuesday 10th of May”, Martini says.

Mehmet Gazioğlu, CEO of the Tersan shipyard, has also been looking forward to this day.

“At Tersan Shipyard, we are so proud to deliver the second vessel of the series; Havila Castor to Havila Voyages which represents our reliability, quality and solution-oriented approach. While the flag ship Havila Capella which is awarded as the “Next Generation Ship Award” is carrying Tersan Shipyard’s name along the Norwegian shores, Havila Castor will soon accompany her to share this pride”, Gazioğlu says.

“It is also a great pleasure for Tersan Shipyard to share our valuable partner Havila Voyages` excitement to introduce the passengers travelling on the historical route between Bergen and Kirkenes with top quality service. Thanks to Havila Voyages` trust in Tersan; we will work hard to proceed with the construction of the third and fourth vessels, Havila Polaris and Havila Pollux.”

Has gained experience
Havila Castor is identical to its sister ship, Havila Capella, which the company had delivery of in November 2021. Thus, some experience has been gained that will be useful going forward.

“The ship we have delivery of today is much closer to operational readiness for the coastal route Bergen – Kirkenes than Havila Capella was when she was delivered. The ship is going to Bergen for preparation for the first roundtrip, and even though time is short, we will be ready for the first voyage”, says Martini.

Owns the ship
Havila Castor has a market value of around NOK 1.2 billion and is financed with equity and a loan of EUR 46 million from Tersan shipyard and the shipyard’s bank. The loan is for a period of 3 months.

“This solution gives us time to find a proper refinancing of the ship, at the same time as it means that our company owns the ship from this date”, Martini explains.

The initial financing of Havila Castor could not be carried out. The leasing company’s lack of financing of the delivery term has resulted in Havila Kystruten being referred to take over the ship by means of alternative financing.

“The solution also means that GTLK has no security in Havila Castor, and the result is that our shipping company owns the ship 100 % from today’s date”, Martini explains.

Havila Castor is owned by the company HK Ship V AS – a 100 percent owned subsidiary of Havila Kystruten Operations AS.

Martini states that Havila Voyages is already in the process of refinancing Havila Castor and the two remaining ships that will be delivered later this year, as well as Havila Capella.

“The largest challenge is of course Havila Capella since we lease it from GTLK Asia, which is now sanctioned. We work with solutions here as well, to cut all ties to Russian and sanctioned companies”, says Martini.

As a Norwegian ship, the insurance coverage for Havila Castor has been maintained in accordance with original insurance agreements entered for the fleet.

“Havila Castor will now be cleared through customs in Turkey before she starts sailing home to Norway. On that voyage, she will have a crew of 60 people who will work hard to get the ship ready for the start of the route. We expect Havila Castor to arrive in Bergen around 5th of May and will then put in all the resources we can for her to get on schedule as planned”, says Martini.

Greeted with great excitement
Havila Voyages` entry on the classic coastal route between Bergen and Kirkenes is one of the largest investments in Norwegian tourism in many years, and the reception so far has been very good.

“Every day we experience that the coastal communities we visit welcome us with open arms, and that many appreciate our presence. We want to contribute to increased value creation along the coast, and in Norway. It is with a great deal of humbleness that we have taken this task”, says Martini.

“It is very nice to experience the excitement we are met with, and we look forward to getting all the ships in operation”, he continues.

Martini talks about great interest in traveling with Havila Castor during the coming summer season.

The ship of the future
In the beginning of April, the sister ship Havila Capella was awarded the “Next Generation Ship Award” during the Nor-Shipping event outside Oslo.

“Since the ships are identical, Havila Castor has the same assets as Havila Capella. Among other things this means that the ships will be the first ships that can sail emission-free, at the same time as we are already sailing more environmentally friendly than has ever been done along the Norwegian coast. Havila Castor is clearly also the ship of the future”, Martini explains.

The battery pack on board the Havila Castor weighs a full 86 tons and has an output of 6.1 megawatts. The ship can sail up to 4 hours on pure battery power, completely emission-free. In addition, the ship runs on liquefied natural gas (LNG), which reduces CO2 emissions by around 25 % and NOx emissions by up to 90 %. This makes Havila Voyages` ships the most environmentally friendly ships sailing the coastal route.

The ships are also built to run on the fuel of the future. Liquid biogas (LBG) can basically be used immediately and mixed into the LNG tank. In addition, the systems on board are prepared to use hydrogen or ammonia as fuel in the future.

“We have a clear goal of using liquid biogas as soon as we can. It all boils down to both cost and not least availability. We are ready to contribute to even less emissions from our sailings”, Martini concludes.