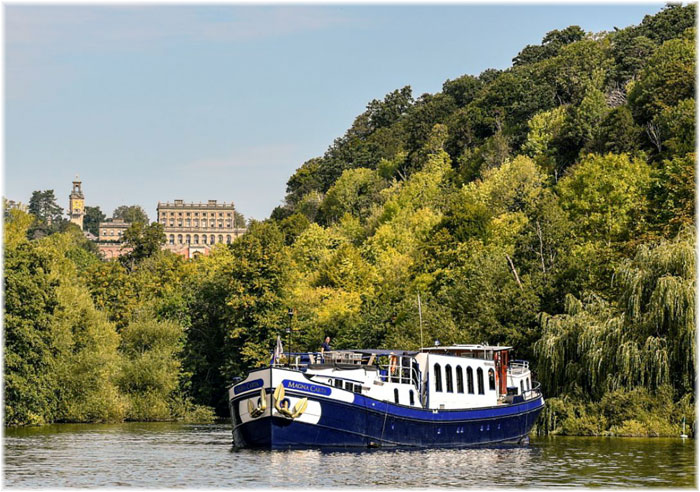 With period dramas such as Bridgerton, Downton Abbey, and The Crown captivating television audiences everywhere, European Waterways is calling attention to the numerous filming locations on the itinerary of the luxurious 8-passenger hotel barge, Magna Carta.

Cruising England’s historic River Thames, the vessel journeys along one of the South of England’s most picturesque routes. It treats guests to views of royal palaces, aristocratic estates, rural landscapes, and centuries-old riverside villages that recall the splendor and old-world charm of Great Britain.

Downton Abbey Cruise
Among the highlights of Magna Carta’s diverse itineraries are its Downton Abbey cruises, which are available only on select departures. The cruise itinerary includes a tour of Highclere Castle -“home” to the fictional Crawley family and the real-life residence of Lord and Lady Carnarvon. Considered among the most elegant examples of England’s Victorian castles, Highclere boasts some 250 to 300 rooms and dominates a 1,000-acre estate that features meticulously manicured gardens.

A Downton Abbey cruise includes a tour of some of Highclere Castle’s bedrooms, including the main state rooms, which will be familiar to Downton Abbey fans. Guests also tour its Egyptian exhibition, which celebrates the 5th Earl of Carnarvon’s discovery of the tomb of Tutankhamun, and enjoy a stroll among the gardens. A limited number of cabins are still available on the Magna Carta’s August 21 and 28, 2022 Downton Abbey departures. Other departure dates can be booked, based on availability.

“This year’s highly anticipated premiere of Downton Abbey: A New Era has been selling out Highclere Castle tours for months in advance, but we’ve secured a limited number of tickets for our guests,” noted Derek Banks, European Waterways’ managing director. “We’ll visit this magnificent estate and additional locations associated with the show and other period dramas.”

From Bridgerton to The Crown
Though there are only a limited number of Downton Abbey departures, every Magna Carta cruise includes excursions to other famous locations. For example, guests will explore Henry VIII’s Hampton Court and its world-famous gardens, which serve as Queen Charlotte’s residence in Bridgerton.

From the set of The Crown, they will tour Windsor Castle, which is the home of the Queen of England and the largest inhabited castle in the world. Bridgerton fans may also be able to visit such filming locations as Basildon, Painshill and Syon House, upon request. Another excursion option is Windsor Great Park, where Bridgerton’s title character and his love, Kate Sharma, go horseback riding.

As always with European Waterways’ all-inclusive hotel barge cruises, the Magna Carta’s itinerary includes many “Insider Experiences” that help immerse guests in the history and culture of the region. Among them is a private tour of Peter Freebody’s 300-year-old boatyard, where expert craftsmen still build and restore traditional River Thames boats. Guests also visit the famous Stanley Spencer Gallery in Cookham, where the artist was born. They can explore the town, which served as the backdrop for many of his paintings.

“England is rich in historical locations and architecture. A Magna Carta cruise can immerse you in the unparalleled grandeur and pastoral beauty of the country’s past,” said Banks.