A-ROSA FLORA sails the Danube. Popular international ship moves to new river as A-ROSA SENA takes over on the Rhine 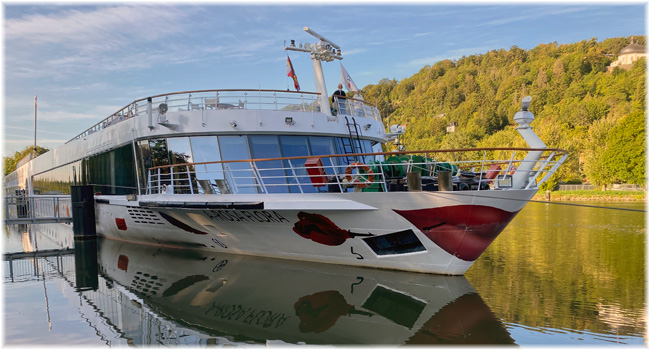 A-ROSA FLORA – one of A-ROSA’s international ships – is moving on to new endeavors on the Danube, as the E-Motion Ship A-ROSA SENA is put into service, joining the Rhine fleet.

This previous Sunday (May 8th) A-ROSA FLORA has started her first voyage towards the Danube Delta, on which guests will spend 16 nights aboard the ship.

During their time onboard they will not only get to see impressive cityscapes of capitals like Vienna, Budapest and Bucharest, but also some of nature’s most fascinating wonders such as the Cataracts, the “Iron Gates” and eventually the Black Sea.

This season guests can also book Danube Classics (seven nights), Danube Cataracts (twelve nights) and Danube Discovery (five nights) aboard the A-ROSA FLORA. Afterwards the famous Christmas market cruises as well as city cruises over Christmas and New Year’s Eve will be on the ship’s schedule.

The A-ROSA FLORA, built in 2014, is especially popular among international travelers. The ship entices with a very familiar atmosphere given its great crew and only a moderate number of guests aboard. The sundeck offers a swimming pool, a BBQ station, a putting green as well as a roofed seating area, whereas another highlight – the lounge with panoramic windows – can be found on deck two.

Furthermore, there are various cabin options, including family cabins and generously sized suites. Up to now a stay in one of A-ROSA’s junior or balcony suites on the Danube was only possible until late fall, but in the future A-ROSA FLORA will offer such opportunity during the season finale as well as over Christmas and New Year’s Eve.