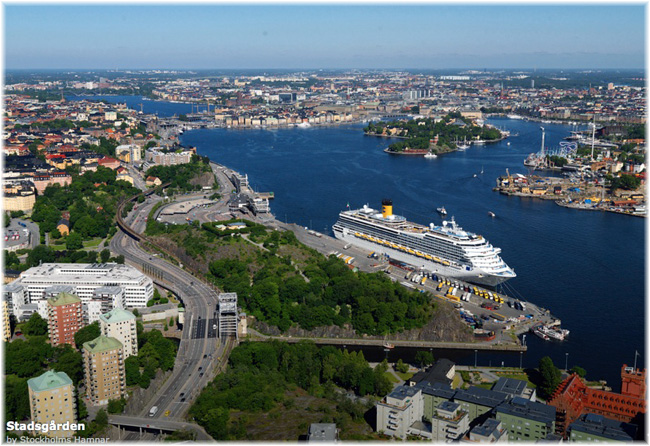 Sweden was the only European country not to have any lockdowns during the Covid-19 pandemic years.

“We had an open society, only with recommendations that we had to adopt,” explains Stefan Scheja, manager cruise and ferry Ports of Stockholm.

“This gave us the possibility and option to welcome cruise vessels whenever the situation allowed during the pandemic. Stockholm was very attractive even when ‘blue cruises’ were introduced: no passengers were allowed to go ashore due to cruise companies’ protocols.”

However, passengers could enjoy cruising the unique archipelago and have a very nice view of the old city, when moored at Stockholm’s most central cruise quays.

With the planned restart in July 2021, Phoenix Reisen decided without hesitation to call at many Swedish destinations, instead of ports in other countries that had not yet reopened.

Director cruise department Michael Schulze says: “Our hope was great, that the planned countries would open in time. Unfortunately, that often didn’t happen and we had to come up with something at very short notice. Since Sweden was looking forward to foreign guests visiting at this stage, the official requirements and regulations were designed in such a way that they could be mastered.

“This resulted in some purely Swedish cruises from/to German homeports, with numerous destinations on the itinerary within Sweden. Thanks to our incredibly grateful and flexible guests – who were just happy to finally be able to travel again – these first departures were a complete success. Guests, as well as crew, were touched by the great hospitality of the Swedes and everyone was impressed by some hitherto unknown destinations.”

First of all, Stockholm was extended from a ‘must-have’ spot to an overnight stay, but Sweden has more to offer than the capital city and Gothenburg. Lysekil and Ornskoldsvik are just two of the numerous destinations that have not been so much in the cruise spotlight, but were convincing as places to visit.

The Russian invasion of Ukraine in February led to the the removal of Russian ports (St Petersburg and Baltysk in Kaliningrad) from all cruise company itineraries. This resulted in ports such as Stockholm, Tallinn and Helsinki, losing calls due to companies deciding to reposition some of their vessels outside the Baltic.

Stockholm, for example decreased from over 300 calls at the beginning of this year to about 220 today. Scheja says: “The positive upside for Stockholm is that most of the vessels are still in the Baltic, and many of them stay another day in Stockholm on an overnight. This is very positive for the city and the region, allowing passengers to enjoy and explore the destination even more.”

For the Baltic in general, he adds that this new situation has had a very positive effect on minor cruise ports/destinations that have the possibility to welcome mid- and small-size cruise vessels.

“Many small destinations around the Swedish coastline, as well all other destinations in countries with coastlines around the Baltic, now have an exceptional time to promote and show their fantastic small hidden gems. Hopefully this will have a positive spin off for the future,” he says. Adding that for some they are already experiencing an all-time high number of calls.

In the case of Phoenix Reisen, the company was able to include overnights in Tallinn, Helsinki, Riga or Gdansk, plus some more alternatives like Kotka, Turku, Rauma, Harnosand, Ornskoldsvik, Stockholm and Saareema Island. “Each of these destinations has something to offer, be it culture and history or natural idyll and country life. The Baltic region and the Baltic States offer a wonderful variety,” says Schulze.

Scheja comments: “Hopefully we all can strengthen our destinations and brands to continue to attract cruise companies to sail in the Baltic for many years to come, despite the dark cloud on the sky for the moment.”

Speaking of Stockholm specifically, he hopes that the different perspective afforded Stockholm during the pandemic, will help it to be seen as the new ‘iconic’ port in the Baltic.

“From the city’s perspective, this means a lot. In a normal year, when we welcome more than 650,000 cruise guests, they spend around SEK600 million (€57 million) together with the crew. For all involved around the cruise business this is a great restart: when the passengers can spend more time in the city and enjoy culture, food, music, attractions and the fantastic surroundings of water and green areas wherever they are in the city.”

To extend its offering, Stockholm has transformed the old container quay – Frihamnen F655 – to a cruise quay. The inaugural call was on May 20 when newcomer Ambassador Cruise Line arrived in the port for the first time with Ambience. Scheja says: “Next year this quay will be fully developed as a full turnaround quay, which will more or less double our turnaround capacity.”

In addition the port’s first onshore power plant will be deployed at its most central quay – Stadsgarden (S167) – next year, supplying cruise vessels with pure green power from the city. The second one – also at Stadsgarden (S160) – will be up and running in 2024.

“This means that we continue to strengthen our so-important sustainability work in the port and the city, even in this challenging period of time,” he adds.