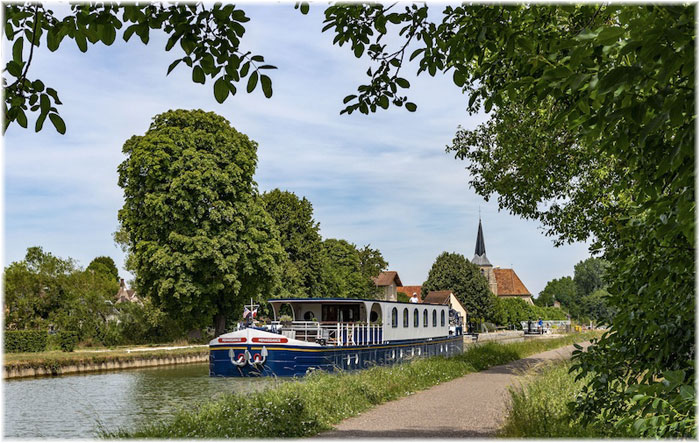 This year, with France celebrating the 200th anniversary of the birthday of Rosa Bonheur, one of the most celebrated female artists of the 19th century, European Waterways announced enhancements to its tour of the artist’s meticulously preserved studio.

One of the newest “Insider Experiences” on the company’s Upper Loire and Western Burgundy cruise aboard the 8-passenger hotel barge Renaissance, the Bonheur excursion now includes lunch in the private salon of the artist’s château.

Guests will then join the owner for a private tour of the studio, untouched since Bonheur’s last painting session 120 years ago, to learn more of the pioneering artist’s intriguing life.

Bonheur is admired, not just for her remarkably realistic portrayal of animals, which were her favorite subjects, but also because of her accomplishments in what was a male-dominated field. She was the first female artist to win France’s Legion of Honor in 1865.

She lived an unconventional life, dressing like a man, sporting a cropped hairstyle, smoking, and sharing her home with a lifelong female friend. Copies of her most famous painting, “The Horse Fair”, can still be found in thousands of homes, while the original is on display today at the New York Metropolitan Museum of Art. Meanwhile, France’s year-long celebration of the artist will culminate with a major exhibition of her work at Paris’ famous Musée d’Orsay from October 2022 through January 2023.

Among the fascinating aspects of Bonheur’s history is her surprising connection to the American West. She struck up a friendship with “Buffalo Bill” Cody when she attended his Wild West show in Paris in 1889 to sketch his exotic animals and Native American warriors.

She subsequently invited him to her studio, where she painted his portrait. He, in turn, gave her his native Indian costume, which still hangs there today and can be viewed by visitors. Bonheur’s experience inspired her to produce some 50 artworks depicting Native Americans, wild buffalos and mustangs that reflected, in her words, “the broad prairies…high mountains and the free life” of the American West.

“The private Bonheur studio tour is just one of many ‘Insider Experiences’ to be found among European Waterways’ diverse luxury hotel barge cruises throughout Europe and the U.K.,” noted Derek Banks, the company’s managing director. “Depending on the cruise, we offer private wine tastings, private and sometimes exclusive tours, and even meals with the aristocracy that include lunch with a baroness and dinner with a countess!”

Among other highlights of the classic Renaissance cruise is a private tour and cooking demonstration at the Château de La Bussière, also known as the “Fishermen’s Castle” for its collection of artifacts and artwork that illustrate different fishing techniques throughout history.

The spacious Renaissance features dining furniture and artworks in the style of a classic French manor house, with a large forward deck that is ideal for alfresco dining. Other highlights of the cruise include the crossing of the Briare aqueduct over the River Loire. Called “a magnificent piece of engineering,” it was designed by Gustave Eiffel of Eiffel Tower and Statue of Liberty fame and is the longest steel canal aqueduct in France. This is followed by a tasting at the Sancerre winery of La Perriere and a private tour of its operations and cellar, located inside huge natural caves that date back to the Tertiary Era.