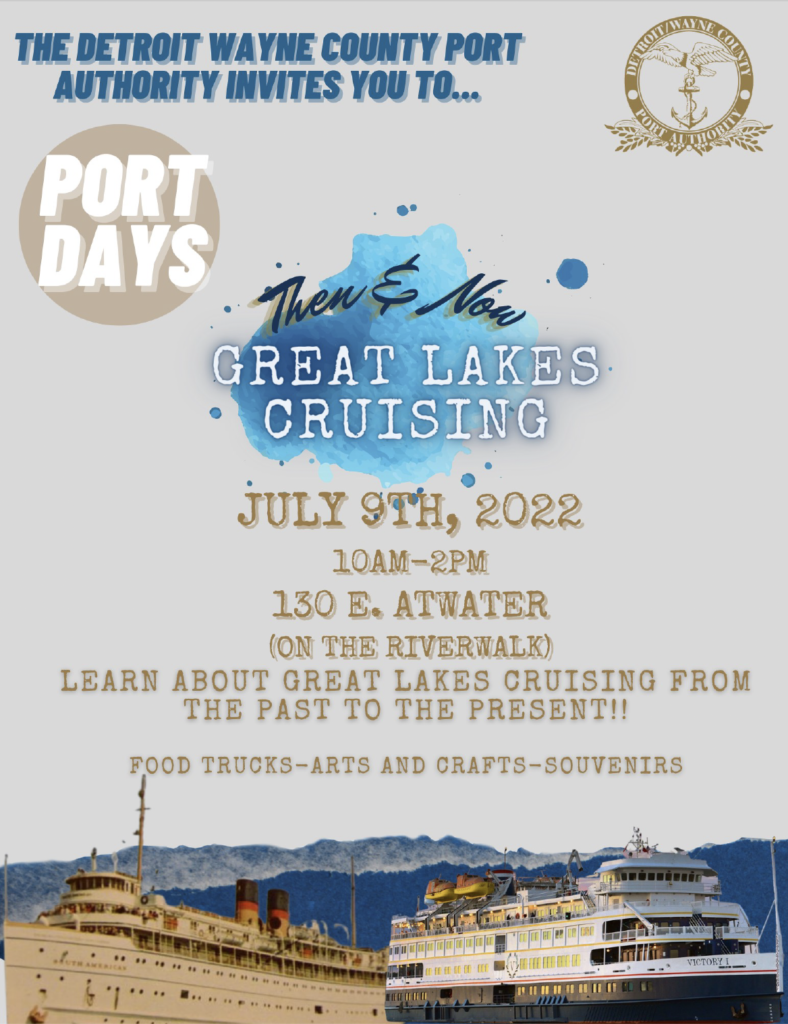 DHS provided artifacts and history of Great Lakes cruise ships and Visit Detroit brought information about the amazing local institutions and tourist destinations that cruise ship passengers experience when making a port of call visit to the D.

Hundreds of visitors along the Detroit Riverwalk learned a lot and enjoyed the boat-themed music and danced a bit with Detroit Tigers’ mascot Paws.

AQV hosted a group of local leaders for a tour of their luxurious Ocean Navigator cruise ship, which was docked for the day, and presented the Port Authority with a plaque, recognizing the great cooperation among all parties and support for cruising as well as the tourism industry for Metro Detroit.

They also selected Paws as Captain of the Day. The Port Authority’s Executive Director Mark Schrupp described the event as “a tremendous success that helped further our mission to bring awareness of the benefits of the Great Lakes to our community and local economy.” Michael Hicks, Senior Director, Marketing and Communications & Global Public Relations for American Queen Voyages thanked the Port Authority for “an incredible day in Detroit with a wonderful group of elected officials and community leaders sharing a unified passion for the city and committed to Great Lakes cruising.”

The next Port Day will occur on Saturday, August 20th , also at the Port Authority headquarters along the Riverwalk (130 E. Atwater) and will celebrate Maritime careers – those on ships and dockside.

In addition to presenting the history of maritime work, the event will focus on current jobs and will simultaneously serve as a Job Fair for maritime work. Workers will learn how to obtain tuition free training for good-paying union jobs through the Seafarers’ International Union as well as work in local terminals, like the Port Authority’s general cargo dock. AQV’s Michael Hicks said his company will be there to recruit Detroiters to work on their ships and riverboats throughout the country.