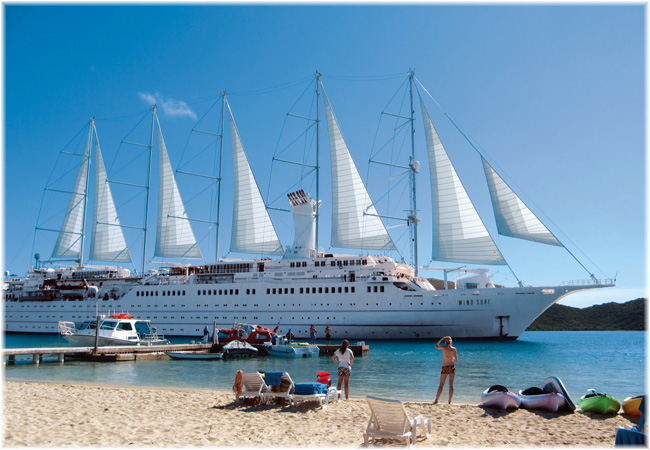 Windstar Cruises has just the thing to shake off the winter blahs. The small ship cruise line has drawn up a new beach bum’s delight of an itinerary beginning winter of 2023.

Beach Fun & Sun: A Remote Caribbean Getaway has seven days on some of the most beautiful islands in the Caribbean including stops in St. Maarten, Antigua, St. Barts, Anguilla, Jost Van Dyke (overnight), Virgin Gorda, and Tortola.

The November 4 sailing only will take place on Windstar’s all-suite Star Pride and the other eight departures are aboard the 342-guest classic sailing yacht Wind Surf.

Both yachts’ Watersports Platforms (which allow guests to jump from the yacht into the sea) will be operational daily on these cruises, except for embarkation/disembarkation days, so the sailings will be very focused on beaches, swimming, watersports, and snorkeling – all the things we want to do in paradise. Current rates are from $2,599 per guest.

Beach Fun & Sun can easily be combined with Windstar’s Classic Caribbean for a two-week cruise, as the itineraries alternate and both depart from St. Maarten. Classic Caribbean includes stops in Dominica, Guadeloupe, St. Kitts, and Nevis, as well as a repeat in St. Barts (and who could complain about that).

“We created this itinerary specifically for people who like to spend time enjoying some of the best tropical beaches, swimming and watersports activities,” said Windstar Cruises’ President Christopher Prelog. “Our small yachts visit scenic Caribbean islands for a peaceful, relaxing vacation away from crowds.”

Also new in the Caribbean: Windstar will be sailing from Miami for the first time in December, 2022.

The small ship cruise line just relocated its offices to Miami from Seattle, with a grand opening in June, which makes the sailings particularly meaningful to Windstar staff and crew. Jungles & Jewels of the Central American Coast stops in Key West before heading to Mexico, Belize, Guatemala and Honduras, then returning to Miami. The new Central America & the Panama Canal Revealed cruise brings guests from Miami to Mexico, Belize, Honduras, Costa Rica, and Panama.