Bodrum ends the season with a record number of cruise lines: The 101st and last ship, Costa Venezia, completed the 2022 cruise season 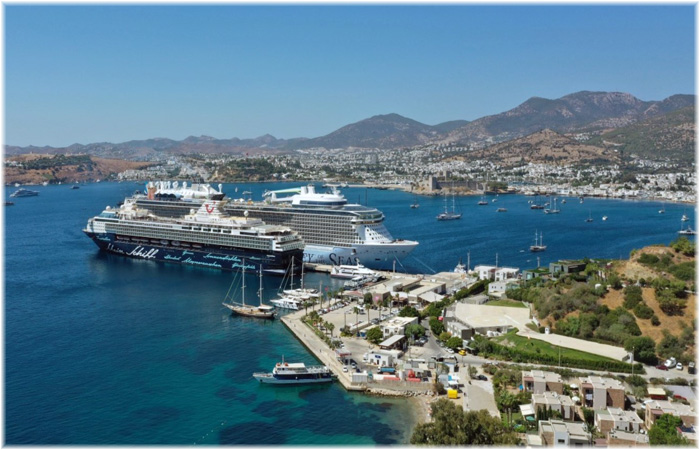 Bodrum Cruise Port, one of the most important passenger entrance gates, adding value to tourism in Bodrum district of Muğla, hosted the 101st and last call of the year on Tuesday, November 22.

The season ended with 323 meters long Costa Venezia, which visited Bodrum 15 times during the season.

Bodrum Cruise Port, which is part of world’s largest cruise port operator Global Ports Holding, hosted thousands of tourists from different countries this year, with a record number of ships and passengers. Bodrum, one of Turkey’s favorite tourism destinations, has also shone in terms of cruise tourism this year.

In the 2022 season Bodrum Cruise Port, with 101 cruises and nearly 100,000 passengers, became the 3rd port in the country, after Kuşadası and Istanbul.

The ships of the world’s most important cruise companies passed through the waters of Bodrum this year. The 347-meter-long Odyssey of the Seas, belonging to the Royal Caribbean, visited Bodrum for the first time and Bodrum also hosted a ship of this size for the first time in its history.

Bodrum Cruise Port successfully carried out turnaround operations (passenger exchange) in Bodrum this year, serving nearly 15,000 passengers on 21 cruises as the home port of the Blue Sapphire ship. Also, adding 650 voyages between Bodrum-Kos and over 100,000 ferry passengers to the cruise travel, Bodrum attracted attention with its sea tourism.

Aziz Güngör, Director of Eastern Mediterranean Ports of Global Ports Holding, said: “Bodrum has proven its position as one of Turkey’s high-potential main ports this year, with its location, the domestic and international airport terminal providing strategic flight routes, and the high bed capacities provided by its hotels. We believe it will continue to prove its postion strongly in year 2023.”

Operated by Global Ports Holding, Bodrum Cruise Port offers full terminal services, marine services and ancillary services. Bodrum Cruise Port has invested heavily in port facilities, including the construction of a terminal building and pier, also offers a variety of amenities such as duty free shopping areas, travel agencies, restaurants and cafes. The port has the Green Port accreditation with the approval of the Ministry of Maritime Transport and Communications, General Directorate of Maritime Trade and Turkish Standards.